From the RuneScape Wiki, the wiki for all things RuneScape
Jump to navigation Jump to search
The Old School RuneScape Wiki also has an article on: osrsw:Morvran
Not to be confused with Morvannon.
Morvran? (edit)? (edit)

Morvran Iorwerth is the nephew of the late Lord Iorwerth. He can be found in the Iorwerth Clan district of Prifddinas, and acts as the second highest level slayer master in the game, requiring 85 Slayer, a combat level of 120, and completion of Plague's End. He offers the second hardest slayer assignments in the game and also runs the Rush of Blood D&D.

He appears during the Regicide quest but attempting to talk to him results in "Nothing interesting happens."

During the Elven Civil War, he was Head of Intelligence for the Iorwerth Clan and, along with Essyllt, led a warband whose duty was to assassinate enemies.[1] He is very skilled at slaying, as he states that he can kill any beast if he wanted to with ease.[2] Morvran makes his first appearance in Regicide. When the adventurer exits the Underground Pass, a member of the elf resistance known as Idris attempts to ask them what they are doing in elven lands. Morvran and Essyllt ambush and kill Idris, and tell the player to speak to Lord Iorwerth before disappearing into the woods.

When the war ended and Lord Iorwerth was killed by the Dark Lord, Morvran relinquished his position as next-in-line for lordship, allowing Iestin Edern to lead the Iorwerth clan. He stated that it was unconventional, but necessary for the clan.[3] During his travels in the war, he met Kuradal. Kuradal taught Morvran many things about the rest of the world, and in return, Morvran taught her secrets that were closed off from the rest of the world. He also decided to become a slayer master, as he was impressed with her talent.[4] The two are on fairly good terms, as Kuradal supplies Morvran the monsters for his dungeon.[5]

Despite knowing that the war was unjustified, he states that he was just doing his job.[6] He claims that his targets were all of military value and never resorted to the use of torture.[7]

During The Light Within, Morvran reluctantly grants the adventurer access to his dungeon so the adventurer can enter the Grand Library to retrieve the Seren shard of darkness.

Completing 50 tasks assigned by Morvran grants an average of 32 points per tasks, if Smoking kills has been completed.

For obtaining the of the Iorwerth title, a player must successfully complete eight dark beast Slayer tasks assigned by Morvran. Co-op dark beast assignments will count, as well as tasks obtained with the helm of darkness; however, players cannot use a dark beast enhancer or helm of darkness while on a co-op task. Both players must have the same task before getting into a co-op or both players must have no task to be able to receive a co-op assignment.

Morvran offers a unique Slayer challenge occasionally. There is no penalty for refusing this challenge. Morvran's challenge is for the player to slay the following bosses once each:

Upon killing each boss the player will acquire dark crystals in their inventory. These debuff the player, by reducing their damage dealt and amount healed or increasing the damage that the player takes, for the remaining bosses. Although the crystals can be banked, the player must carry all collected crystals while killing the remaining bosses or they will not progress through the challenge. It is therefore advised to tackle harder bosses first and finish with easier bosses.

Once the last boss is killed, the crystals will be sent straight to Morvran, and the player will be rewarded with 50,000 Slayer experience and 45 Slayer points (if the quest Smoking Kills is completed), along with usual points from the player's current completed tasks. Each completion of Morvran's challenge increases the cap of black crystals obtainable at once by one.

. For Morvran, assuming all possible assignments are available,

Preferring a task makes it approximately twice as likely to be assigned, for the first assignment choice, but does not affect the weighting of the second assignment choice provided by a Slayer VIP ticket.[8] 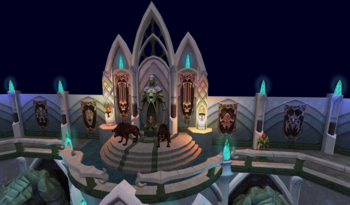 Morvran, watching slayers within his dungeon.