From the RuneScape Wiki, the wiki for all things RuneScape
Jump to navigation Jump to search
For the standard variant, see Edimmu.

An edimmu is a Slayer monster in Daemonheim that can be killed with level 90 Slayer. It attacks players with a fairly accurate red orb magic attack and uses melee when its target is adjacent to it. Additionally, this red orb heals the edimmu for the damage in which it hits. It is weak against slashing weapons, so those with longswords, battleaxes, and two-handed swords will be able to dispatch it without too much trouble.

Edimmu are much sought after for their blood necklace drops. However, it is rare to see an edimmu; there have been sightings on furnished floors and they appear very rarely on abandoned floors, but the likelihood of encountering one becomes greater on the occult floors and even better on Warped floors. Having more high level slayers in your team helps, but does not guarantee an encounter.

The blood necklace used to have a 30 second limit before it could be picked up. Only the one who dealt the most damage was able to pick it up instantly. However, this was removed in the Evolution of Combat update, currently whoever hits the monster first will receive the drop, as if they did the most damage.

On 10 September 2013 Dungeoneering Hard Mode was released along with the Daemonheim task set. On Hard Mode floors, edimmu, as are other slayer monsters, are significantly more common encounters and can appear as early as floor 1. 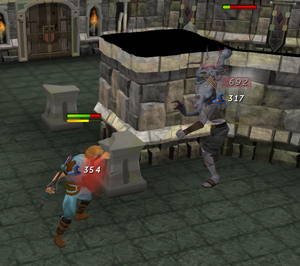