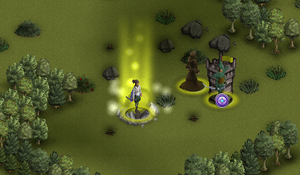 Valis trains Saradominist rangers before Zamorak's forces would force him to train their rangers instead.

Valis was an elven commander who fought in the God Wars, during what is now referred to as the Fall of Hallowvale, in which the forces of Lord Drakan invaded Hallowvale. It is recorded that Valis fought on the side of Saradomin, training and leading his troupe of archers and monks against Zamorakian forces, digging his heels in at a stronghold in the Haunted Woods. It is here when he ultimately was defeated, when Zamorak's werewolves and undead troops found and attacked his forces.

Valis does not appear within the main game of RuneScape, as he lived and died during the Third Age, which was several thousand years prior to the main events of the game. However, he appears in the Haunted Woods mission of the Zamorak Campaign of the FunOrb game Armies of Gielinor. Players must lead a Zamorakian army of werewolves, skeletons, necromancers and barbarians against the Saradominist forces within the area, led by Valis and consisting of Saradomin rangers, owls, paladins, monks and barbarians, and in order to complete the campaign they must defeat him. Ultimately, Valis was captured by the Zamorakians and forced into training rangers for them.