From the RuneScape Wiki, the wiki for all things RuneScape
Jump to: navigation, search
The Old School RuneScape Wiki also has an article on: osrsw:Kree'arra
For the achievement, see Kree'arra (achievement).
Loading...
MonsterSliske's Endgame 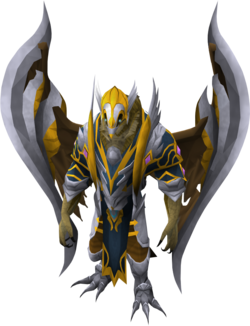 Kree'arra is a large and powerful aviansie and leads Armadyl's army in the God Wars Dungeon. Even though he is walking, he cannot be attacked with Melee, forcing players to use either Magic or Ranged to harm him. Attempting to attack with melee will give the player a message that states "Kree'arra's wings would hit you away before you could attack using melee."

In order to reach Kree'arra, players may enter Armadyl's Eyrie at the south end of the main chamber. Players must have at least level 70

Ranged in order to enter the area, signified by a large gong that players will interact with. A total of at least 40 Armadyl killcount is required to enter Kree'arra's chamber at the end of the encampment, unless the Totem of Intimidation is active on Anachronia. He is guarded by his 3 generals: Flight Kilisa, Flockleader Geerin, and Wingman Skree.

Obtaining all unique drops will unlock the [Name], Swiftness of the Aviansie title.

During the Gielinorian God Wars, Zamorak's power had expanded greatly and was seen as a threat by the other gods. Armadyl, Bandos and Saradomin agreed to an uneasy truce to defeat Zamorak first. They created the godsword, a weapon that is said to be capable of killing a god.

As a flock of aviansie carrying the sword made its way, they were ambushed by Zamorakian forces. They hid inside the temple, prompting the three gods to send reinforcements; Bandos sent General Graardor, Saradomin sent Commander Zilyana, and Armadyl sent Kree'arra. Eventually, General Graardor betrayed the group, resulting in Kree'arra and Zilyana left against the two enemies.

The situation deteriorated even further, and soon the fight for the godsword became a battle royale. Eventually, Kree'arra and his soldiers obtained a pendant bearing the icon of their god, which they wore. Kree'arra was unsure if he should attack Zilyana's encampment as it would leave him open to the north by Graardor. Zilyana, learning of his plans from an enchanted amulet, convinced him to do so. In a disastrous assault, an unknown amount of aviansie were killed and they lost a powerful crossbow in the process.

The magus Aeternam cast a powerful freezing spell on the temple, imprisoning the combatants within for thousands of years, effectively ending the war. Kree'arra was amongst those left imprisoned. Very shortly after this occurred, the god Guthix established the Edicts of Guthix, preventing the direct involvement of any deity in Gielinor. The departure of the world's Gods and the subsequent end of the God Wars meant that the cavern was forgotten, and Kree'arra would remain frozen in time with its warring armies for more than 2,000 years to come.

In the recent Fifth Age, investigations by both the dwarven explorer Nestor Peregrine and the Asgarnian Temple Knights nearly resulted in the cave's (and Kree'arra's) rediscovery. In 169, tectonic movement in the neighbouring Wilderness caused large portions of the cave to defrost, eventually leading to the release of most of the cavern's population. Unaware that the God Wars have ended, Kree'arra and the rest of the battle's leaders have resumed the battle for the godsword once again, seemingly unaware that centuries have passed since the end of the wars.

Kree'arra eventually learnt that Guthix's hiding place was discovered and flew with his rivals Zilyana and K'ril Tsutsaroth. As they argued, Zilyana noticed an adventurer had arrived before them. Zilyana told Kree'arra to deal with them before proceeding further into the chambers. Kree'arra pleaded with the adventurer to leave, but they refused to and he was forced to fight them. Despite his best efforts, he was defeated, and he left the chambers in shame.

Regardless, Guthix was assassinated by the Mahjarrat Sliske, and thus, Armadyl returned to Gielinor, giving Kree'arra pride and purpose again.

With Armadyl's return, Kree'arra spent his time planning with his god for the future. He was too busy reassembling Armadyl's armies, so he sent his bodyguards Flockleader Geerin and Flight Kilisa to the Empyrean Citadel to accompany Armadyl. 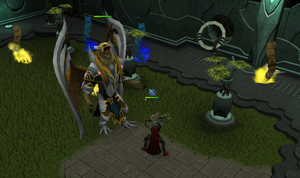 Fighting Kree'arra during the Attempt to assassinate Guthix

When Kree'arra is fought during The World Wakes he has significantly lower stats and gains some additional abilities, making the fight fairly different from when he is fought normally. In the quest fight, he can be harmed with melee attacks.

When fought as part of God Wars Dungeon Hard Mode, he gains the abilities he had during The World Wakes, and his stats are significantly increased. He also has significantly better drops, although the chances for Armadyl armour are not increased.

The main difference in these fights is that Kree'arra has summoned blue lightning vortices, which deal magic damage, and yellow whirlwinds, which deal ranged damage. These roam around the room, and touching one of these whirlwinds deals over 2,000 rapid damage for as long as they are stood on.

Occasionally, Kree'arra will walk towards the centre of the room, shouting "Storms align to me!", and recalls all of the whirlwinds in the room, causing them to head towards him. He becomes unattackable during this state, and all incoming attacks are reduced to 0 damage as he begins this attack. Once all of the whirlwinds have reached him, he shouts "Feel Armadyl's power!" and releases the whirlwinds, causing them to shoot out of him in various different directions towards the edges of the room.