Lapalok is a Slayer Master who replaces Duradel after his death during While Guthix Sleeps. Lapalok can be found on the 1st floor[UK]2nd floor[US] of the building north of Fernahei's Fishing Hut in Shilo Village. Players must have at least 50 Slayer and a combat level of 100 before they can receive Slayer assignments from him.

He has exactly the same functions as Duradel, and assigns the same tasks.

He is a follower of Amascut and supports her current plans and attempts of desert domination. He is also glad that Duradel's fate was of a destructive nature. Initially, he was named Disciple of the Devourer, and his name was only seen in the NPC Contact list. This was changed on 9 December 2008 after feedback from players. With the Christmas update that year some of his advice dialogue was changed to be more similar to that of Sumona. He believes the time of the Devourer approaches and that She is on the ascent once more.

The amount of Slayer points gained by completing tasks depends on the amount of consecutively completed tasks, and whether Smoking kills has been completed or not. Completing 50 tasks assigned by Lapalok grants an average of 24 points per tasks. 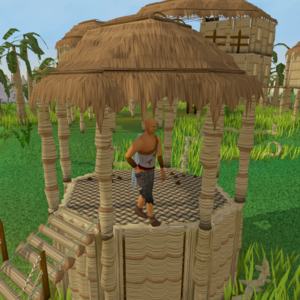 As his successor, Lapalok maintains the same assignments, weightings, and challenge as Duradel.

To complete the Ten in a Row achievement from the elite Karamja achievements, players must complete 10 or 50 consecutive tasks at Lapalok to earn at least 75 Slayer points from a single task.