From the RuneScape Wiki, the wiki for all things RuneScape
Jump to: navigation, search
This article is about the dead elf at Paterdomus. For the elves using crystal bows, see elf warrior.
Elf Ranger? (edit) 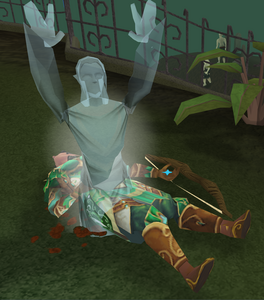 An Elf Ranger, of Clan Cadarn, was sent eastward by Arianwyn, leader of the rebel elves of Lletya and Lord of Clan Cadarn, to investigate non-elven forms of magic through a contact in Morytania. Following the breaking of the Edicts of Guthix, the rebel elves - who remained faithful to the elven goddess, Seren, who was then in a shattered form - sought to investigate how it might be possible to restore her. On her way there, however, she was slaughtered by Sliske along with three Saradominist monks, near Paterdomus. Sliske then planted false evidence, pointing to an elf as the supposed killer of the monks and to a Saradominist as the supposed killer of the elf, as part of his plan to pit the followers of Seren and Saradomin against each other, and to lure both of them personally to his 'Grand Ascendancy' at the Empyrean Citadel. Due to Sliske having kidnapped Death, her soul was unable to leave her body. During Missing, Presumed Death, Icthlarin transports her body to Death's mansion so his helpers could use fragments of Death's scythe to free her soul. Her purpose in travelling east to Morytania was revealed by Arianwyn at the start of The Light Within, taking place after the Elven Civil War when the rebel elves regained control of their home city of Prifddinas, at which time Seren, with elven magic, is actually restored.