From the RuneScape Wiki, the wiki for all things RuneScape
Jump to navigation Jump to search
LaniakeaLaniakea (varanusaurs dinosaur buyer)Laniakea the MAGNIFICENT? (edit) 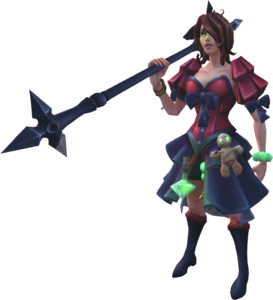 Laniakea [la.ni.ə.keɪ.ə] is a Slayer Master located on Anachronia. Receiving slayer assignments from her requires level 90 Slayer and level 120 Combat, making Laniakea the highest level Slayer Master available. Compared to Morvran, she does not assign desert strykewyrms, grotworms, nechryael, TzHaar, or waterfiends. Instead, she can assign "cluster" tasks where the player can kill any monster falling under that category (e.g. black dragons in a generic dragon task) to complete the assignment.

The Slayer cape and its master variant will always teleport players to the second location, the ruins in south-east Anachronia.

If players bring her a savage spear shaft, plume, cap and tip, she will make a variant of her spear for players to use.

Almost nothing is known about her life, but she was presumably born in the Eastern Lands, a treacherous place full of death and danger. Eventually, she decided to leave her village and sail west, arriving at the human kingdoms sometime later. During her travels, she acquired an ancient doll from an ancient witch coven filled with voodoo magic that allows her to inflict pain on the soul she linked to it. However, she would not use it unless she had no other choice, and the coven was destroyed and its knowledge lost by the time she acquired it. She prefers using poison against her enemies, letting it do the dirty work for her. She also drinks her own poisons as a way to make her immune to them.

She soon met the Order of Slayer Masters while tracking down a beast; both parties met by pure coincidence, and she considered it a competition and slew the beast in front of them. This prompted them to recruit her to their cause, and though initially hesitant because of her upbringing, she eventually accepted due to the lessons she learned from them over the years, primarily from Morvran and Kuradal, along with a desire to belong. However, she left sometime later after meeting a man in the Order; she felt vulnerable after sensing he was hiding something deep down and unprepared for these "alien" feelings, decided to forge her own path.

During her travels, she also learned about the player's noble deeds and was requested by King Roald to assist an expedition to Anachronia, where she was surprised to learn there was more than what was seen on the island. After being ambushed by a pavosaurus rex, she decided to explore the island by herself, though she would occasionally visit the base camp to see how it was doing. She was primarily interested in the south-eastern ruins, along with new sources of poison from both the vile blooms and fugu, which allowed her to stockpile new poisons.

Shortly after arriving on the island, she met up with Thok and Charos, who had come in search of Kerapac. The dragonkin appeared at the base camp and allegedly boasted of his plan to destroy the world. When Kerapac set the island's dinosaurs on a rampage, Laniakea stayed at base camp to defend a group of archaeologists who failed to evacuate in time, using her poisons and her spear.

After foiling Kerapac's plot, Laniakea heard and felt a faint tremor underneath the fortress she had gone to. Some adventurers had gone to investigate, but never returned, and she couldn't use explosives either as Mordaut had forbade their use. Laniakea revealed to the World Guardian that she had deciphered the door, but it was magically locked and could only be unsealed with shadow anima, which she thought destroyed by them. The World Guardian was able to unlock the door and Laniakea decided to accompany them. However, the facility they entered was emanating massive amounts of toxic shadow anima that nearly killed her, but she was strong enough to leave without the World Guardian's assistance.

Helping Laniakea is a miniquest in which the player must help Laniakea restock her supply of poison by catching a fugu, an elusive fish found on the western coast of Anachronia. Doing so requires the player to scour the island for materials to make a custom fishing rod and fishing lure.

Ranch Out of Time[edit | edit source]

Laniakea may occasionally appear at the Ranch Out of Time on Anachronia. She may be sold varanusaurs in exchange for beans. As a medium-sized animal buyer, she will appear or renew her order for varanusaurs every two days and purchase up to 8 animals before leaving, unless the player is at least 'Master Farmer' rank in the farming reputation system; then she will buy up to 16.

The amount of Slayer points gained by completing tasks depends on the amount of consecutively completed tasks, and whether or not Smoking Kills has been completed.

Completing 50 tasks assigned by Laniakea grants an average of 35.2 points per task, if Smoking Kills has been completed.

. For Laniakea, assuming all possible assignments are available,

Laniakea's special assignment is to gather vials of poison from each of the vile blooms. This is done by killing one lampenflora, liverworts, luminous snaggler, and devil's snare. The vials are never obtained as items; a chat box message notifies the player after each successful kill: You gather a small dose of strange looking liquid from the creature and place it in a vial.

Completing her task rewards 50,000 Slayer experience and 45 Slayer points. The rewards for this assignment are not affected by DXP.