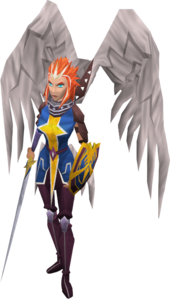 Commander Zilyana, Keeper of the Faith, is the leader of Saradomin's army in the God Wars Dungeon. She is an Icyene, an ancient race of winged beings, chosen by Saradomin to guard his hilt. Commander Zilyana uses a melee attack and a magic attack. She attacks with her multi-target magic attack when her sword glows with a bright blue aura and she raises it in the air. If the attack hits a player, a small wall of lightning will appear around the player. She attacks with melee when she slashes at the player with her sword. Her melee attack is not multi-target.

Both her magic and melee attacks only work at close range. She attacks every 1.2 seconds and both of her attacks hit at the same time (she will only use magic in melee distance). She targets the player closest to her upon spawning, but she switches to the player who has currently done the most damage to her.

Commander Zilyana is located in the back room of Saradomin's Encampment. Players must have level 70 Agility to reach her (boosts cannot be used). In addition, she has three bodyguards: Growler (magic), Bree (ranged), and Starlight (melee).

If blood spells are used on her consistently, the message "Commander Zilyana becomes more enraged by your spells and tries to channel them to increase her own power!" will appear in the chatbox, and her power will be boosted, granting her stronger attacks. This effect stacks (to a cap), so continued use of blood spells may prove fatal. A better alternative is Shadow Barrage, which reduces her damage whilst hitting Zilyana and everything around her.

Obtaining all unique drops will unlock the [Name], Finesse of the Icyene title. 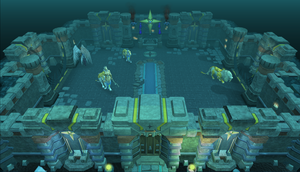 Zilyana and her loyal bodyguards.

Zilyana first came to Gielinor sometime near the end of the God Wars.[3]

Prior to arriving at the Temple of Lost Ancients, Zilyana participated in the battle of Annakarl, where it was under Saradominst control. She battled K'ril Tsutsaroth, but was overpowered by the demon and mortally wounded. Saradomin arrived, teleported her to the Stone of Jas, and used its powers to heal her otherwise fatal wounds.

Eventually, Zilyana was dispatched to the Temple of Lost Ancients to help a flock of aviansie who were pinned by Zamorakian forces. Given a group of priests and knights, she also recruited peasants along the way to strengthen her army. In her notes, she states that it was foolish for the aviansie to retreat into the caverns, and was even more annoyed that General Graardor was sent for "assistance". The three groups were already on uneasy terms when Graardor tried to take the godsword for Bandos, leaving her and Kree'arra against Graador and K'ril.

During one of the skirmishes, her bodyguard Growler became seriously injured and she ordered a retreat, praying for Saradomin's aid. The next day, she found three amulets bearing the symbols of Armadyl, Bandos and Zamorak, which she immediately destroyed and began to find the supposed heretic. The next day, the amulets reappeared on the altar, and she realised that Saradomin was sending them, but was confused with their purpose.

Eventually, Zilyana had her bodyguards wear the amulets; Bree took the pendant with Armadyl's icon. Bree eventually went out with several soldiers to check on the progress of the battle. Zilyana heard the battle and mulled for Bree to return. Bree eventually returned and told Zilyana that it was as if she was calling for him. Zilyana soon realised the purpose of the amulets and praised Saradomin's wisdom. She managed to make the enemy forces wear the amulets by making them as if they were hard-won to prevent suspicion. The situation deteriorated even further and now all sides were battling against each other. Zilyana eventually learned of Kree'arra contemplating to attack her encampment, and using the power of the amulet, convinced him to do so. In the ensuing ambush, she claimed a powerful crossbow from his forces. Eventually, the other factions realised the deception of the amulets and began fighting Zilyana and her forces on even terms.

The magus Aeternam cast a powerful freezing spell on the temple, imprisoning the combatants within for thousands of years, effectively ending the war. Zilyana was amongst those left imprisoned. Very shortly after this occurred, the god Guthix established the Edicts of Guthix, preventing the direct involvement of any deity in Gielinor. The departure of the world's Gods and the subsequent end of the God Wars meant that the cavern was forgotten, and Zilyana would remain frozen in time with its warring armies for more than 2,000 years to come. Due to her prowess in combat and her subsequent disappearance, she was considered a legendary warrior among her people.

In the recent Fifth Age, investigations by both the dwarven explorer Nestor Peregrine and the Asgarnian Temple Knights nearly resulted in the cave's (and Zilyana's) rediscovery. In 169, tectonic movement in the neighbouring Wilderness caused large portions of the cave to defrost, eventually leading to the release of most of the cavern's population. Unaware that the God Wars have ended, Zilyana and the rest of the battle's leaders have resumed the battle for the godsword once again, seemingly unaware that centuries have passed since the end of the wars. 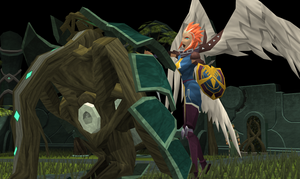 During the quest The World Wakes, Zilyana and her rival generals discover Guthix's hiding spot after an adventurer sets off an alarm. She and Kree'arra are the first two generals to arrive, with K'ril following up soon after. Zilyana orders the adventurer out of their way, but soon orders Kree'arra to deal with the human after K'ril simply crushes the door and moves forward.

The two generals are then met by a stronger door that neither of them are able to breach, with K'ril expressing suspicion that Zilyana would backstab him, though she states that she would only do so if he got in her way if they reached Guthix. Upon seeing the adventurer again, Zilyana states that Kree'arra was a fool, before threatening the adventurer as they both leave.

The adventurer is able to meet up with the Guardian of Guthix, where they make a defence against the impeding assault. The Zamorakians and Bandosians attempt to brute force through the Guthixian defences. When they are repelled, Zilyana leads her soldiers into battle, attempting to break through Juna's barricade so they can reach and kill Guthix. In the ensuing battle, Zilyana sees the Guardian of Guthix Cres and kills him, believing that he is actually Guthix in disguise. Despite Zilyana and her soldiers' efforts, they are unable to breach the barricade, and she shows disdain when the Zarosians arrive shortly after her failed assault.

As the three parties argue, the wall behind Juna collapses. Due to their arguing, Zilyana and the others were unable to see the perpetrator, who is later revealed to be Sliske.

When Sliske kills Guthix, Saradomin is the first to arrive at the scene. Zilyana happily shows her god that Guthix has died, but Saradomin stops her as she is being disrespectful to a fallen god who only wanted to keep Gielinor safe. She later accompanies Saradomin when he leaves. If the World Guardian decided to simply kill Guthix, Juna will mention that Zilyana left a gift for them.

Zilyana makes another appearance in the quest Missing, Presumed Death. She is at the Empyrean Citadel, which was taken over by the Mahjarrat Sliske for his grand ascendancy into godhood. Saradomin chose Zilyana to accompany him to the citadel. As she did not receive a invitation, Zilyana is left outside the entrance with the others. She was seen arguing with the elf Ifleen about the slaughter of Saradominist monks by an elven archer, which was a simple scene made by Sliske to believe both sides were at fault. The World Guardian can either side with Zilyana or Ifleen, or alternatively, tell her the truth.

Zilyana plays a small role in Sliske's Endgame, where she accompanies her god into the labyrinth. After the quest, she can be found at the top of the White Knights' Castle, though she cannot be interacted with in any way.

Prior to the release of the quest, she could be seen at the top of the White Knights' Castle, looking at the eclipse. She could not be interacted with in any way.

She participates in the Council of Burthorpe, representing Saradomin, who isn't present. She gets into arguments with both Moia and Garlandia, the former for being a Zamorakian, and considering the latter to be a traitor.

Zilyana participated in the Battle of the Monolith, where Saradomin placed her under the command of the World Guardian.

After Azzanadra moved the Elder God eggs to the ruins of Senntisten, Saradomin arrived to help stabilise them by draining their anima. Upon his arrival, he declared that Zilyana would be arriving soon to aid in holding off the armies of the Elder Gods in order to stop them from reclaiming the eggs. 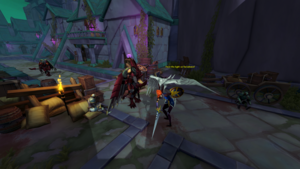 Zilyana arrived alongside her rivals K'ril and Kree'arra to defend her god from the onslaught of Nodon dragonkin sent by Jas. She revealed that she and her rivals had left the cavern once adventurers found and assembled the godsword, and without any purpose, the warring forces simply left. She would occasionally drop down from her position to ambush Nodon commanders and kill them before they could advance towards the cathedral.

Following Zamorak's demonic invasion and the re-establishment of the Edicts of Guthix, Zilyana gathered with Saradomin and Adrasteia to discuss the aftermath of the invasion, where she reported that most of Zamorak's demons had retreaded to the Wilderness after Zamorak's banishment. She was then surprised to learn that the Edicts would also banish Saradomin himself, whereupon she aggressively questioned if the World Guardian was responsible for this. After Saradomin calmed her down, explaining that he had approved of the plan, he then appointed Adrasteia as Basilissa of the Kingdoms, that she may rule in his stead as regent. Zilyana protested this decision, arguing that Adrasteia was merely a child, but Saradomin silenced her and commanded that she address his successor with respect. He further clarified that the kingdoms were allies in name only and that the famine would soon drive them apart (which necessitated that Saradomin's successor did not belong to any of them), but that the people of Gielinor would not bow to the rule of an Icyene, adding that Zilyana was a veteran from another age and that her strength lie in the battlefield instead of the court. Seeing the wisdom in his decision, Zilyana agreed with him. Finally, Saradomin asked Zilyana to serve Adrasteia with the same fervour and devotion she would show to him, to which Zilyana also agreed. Once Saradomin made his final proclamation and departed from Gielinor, Adrasteia requested to be alone, to which Zilyana solemnly complied.

Zilyana later attended Adrasteia's coronation, standing next to her alongside the World Guardian.

When in battle, the Commander shouts several battle cries while fighting the players that dare to venture into her domain. She is voiced by Mod Ana.

Transcripts Commander Zilyana is the author or co-author of: