From the RuneScape Wiki, the wiki for all things RuneScape
Jump to navigation Jump to search
This article is about the library in Prifddinas. For the library in Menaphos, see Grand Library of Menaphos. 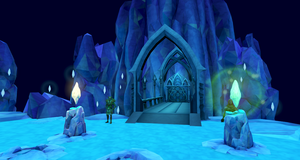 The entrance to the library.

The Grand Library is a massive library hidden in the undercity beneath the capital city of the elves, Prifddinas.

The Grand Library is said to contain vast knowledge, and many secrets that have never fallen into the hands of humans. During Plague's End, Iestin Edern reveals that this is quite literal, and that it contains the seed of Prifddinas itself. 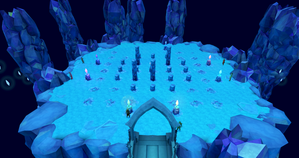 When the God Wars drew to a close, the elven goddess, Seren, was forced to depart from Gielinor. However, since she feared that the knowledge of the library could fall into the wrong hands without her there to physically protect it, she sealed the Grand Library. It was then protected by nine powerful seals, one for each of the clans, and the library could only be opened with the power of all of them.

Iestin told his brother that he believed that one of the seals may have been broken, and by the time players visit the library in Plague's End, it indeed only has 8 seals intact. During the quest, the player gathers each of the elders to open the door to the library, and once inside, they break all the seals to restore Prifddinas, after a confrontation with the Dark Lord, whom Lord Iorwerth wished to use to get into the library and restore Prifddinas without the assistance of the other elves. 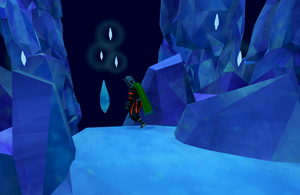 During The Light Within the adventurer returns here via Morvran's Dungeon to retrieve the Seren shard of darkness. The adventurer can chose to collect the shard or to kick it into the abyss.