From the RuneScape Wiki, the wiki for all things RuneScape
Jump to navigation Jump to search
For the title, see of Tarddiad. 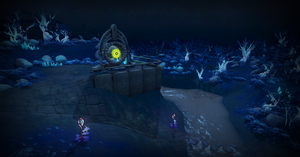 Tarddiad (/tɑːˈðiː.æd/ tar-THE-add) is the original homeworld of the Elves. It was the first world visited by Seren after tending to Mah on Freneskae. She was enamoured by the Elven culture and stayed with them, teaching them the art of crystal singing.

The landscape of Tarddiad is described by the World Gate as "a world covered entirely by trees."

The world gate icon for Tarddiad

The plane also includes various crystalline features. Tarddiad is visited using the World Gate during The Light Within, and remains accessible afterwards. During the quest, the player must collect 50 Tarddian crystals to reconstruct Seren by defeating Crystal Shapeshifters and/or collecting crystal fragments for Angof.

At some point after the Naragi God Wars, Guthix visited this realm. He befriended Seren and invited her to bring the elves to Gielinor.[1]

The Cywir Clan, along with other elves who could not travel, remained behind on Tarddiad. Seren, who mourned Ceidwad's death, inexplicably linked the elves to her while trying to find a way to prolong the elves' lifespan. This caused the elves on Tarddiad to slowly die from what they called the "Sickness" due to their distance from Seren.

The elves soon discovered that the crystals still held part of Seren's essence. Using a variant of the Song of Creation, they imbued them onto their bodies to repress these feelings and found that they could manipulate their bodies. Initially seen as a blessing as they believed it to herald the dawn of a new age, the elves soon discovered that they soon had a craving for more of these crystals. Many of these elves became insane and began to attack anything in sight, but there were still some who were barely able to maintain their sanity, one of these communities being led by Angof.

Elven society on the planet has since collapsed into a state of anarchy, with groups of elves roaming through the planet in search for the crystals.

The World Guardian used the coordinates from Iestin to enter Tarddiad, where they were immediately attacked by one of the insane inhabitants. Exploring further, they soon discovered a more sane elf who introduced herself as Angof. Angof assisted the World Guardian in obtaining filler crystal for Seren.

Following the rediscovery of elves in Tarddiad, the Prifddinas elves are unsure of what to do with them. Angof believes that her kind are beyond redemption, Iestin hints at the suggestion of an invasion should the elves decide to return to Tarddiad, and Morvran believes that the Tarddiadan elves should be put out of their misery, considering it to be a kindness.

During Sliske's Endgame Armadyl approaches Seren and offers her an alliance. Armadyl had learnt what became of the elves, that remained on Tarddiad and wished to help, believing that his aviantese from Abbinah had the medical skills to ease their condition. Armadyl hoped that the elves and aviantese could share the world in a mutual-beneficial alliance.

It is later revealed that Armadyl had indeed travelled to Tarddiad with some aviansie physicians in an effort to help the Tarddian elves as well as escaping the dangerous Abbinah.