The King Black Dragon (named Shakorexis by Hannibus) is an enormous, three-headed black dragon. He was the second dragon ever, created by Kerapac's fellow dragonkin Phalaks, a failed project intended to replicate the powerful Queen Black Dragon[1][2] some time in or before the First Age. One decade later, he was released into the Wilderness.

Killing the King Black Dragon at least once is one of the requirements of redeeming the Dragonkin lamp from Mr. Mordaut.

The King Black Dragon can be killed to collect the soul of a black dragon in an ushabti.

Obtaining all of his unique drops is required for the title [Name] the Last Rider.

There are two artefacts that send players into the King Black Dragon's Lair. Note that the lair itself is not considered part of the Wilderness, and therefore is not subject to Wilderness threat. 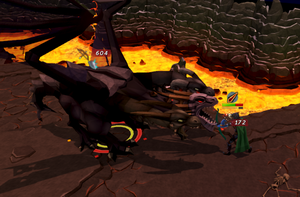 A player fighting the KBD.

Sometime during the Second Age, Zaros brought the Ilujanka to Gielinor after seeing them ride a similar race to the dragons, offering to cure their infertility in exchange for their loyalty.[7] Calling them Dragon Riders, they were feared by their enemies due to their dragon-riding skills. Hannibus eventually found and tamed the King Black Dragon, calling him Shakorexis.[8] The two shared a close bond with each other, with the King Black Dragon stating that the two were like brothers for everything they went through.[9] Hannibus and the rest of the Dragon Riders faithfully served Zaros, until there were five Dragon Riders left, which included Hannibus.[10]

Due to Zaros' failure to fulfil his promise, his Legatus Maximus, Zamorak, offered to do so in exchange for two of the Dragon Riders becoming his personal bodyguards; the Dragon Riders agreed to his offer, and Morvannon and Apropos joined Zamorak, hoping that he could deliver on his promise when Zaros had not.[11] A week after this, the Dragon Riders received word that Zamorak had found a powerful weapon that would allow him to kill Zaros, and that he would make his move soon.[12] Morvannon and Apropos wanted to side with Zamorak while Ablenkian and Balustan remained loyal to Zaros, their dragons supporting their decision by breathing fire into the ground or air.[13] Only Hannibus and the King Black Dragon remained neutral, Hannibus fearing that supporting either side would lead to their extinction.[14] In the end, the Dragon Riders could not reach concensus and did not intervene, hoping that the victor would cure their infertility.[15]

Unfortunately for the Dragon Riders, there was no victor: both Zaros and Zamorak disappeared after their confrontation, and their followers branded the Dragon Riders as traitors for their inaction.[16] Following their "betrayal", the Dragon Riders were hunted down and killed by their supporting side due to confusion, leaving only Hannibus and the King Black Dragon. Zarosian forces attempted to kill the pair for being supposed traitors, but they were able to elude their pursuers and arrived at the cave where Zaros had brought the Ilujanka to Gielinor.[17] Upon learning that the Mahjarrat Enakhra was after him, Hannibus reluctantly left the King Black Dragon to increase his odds of survival.[18] The King Black Dragon soon turned the cave into his lair, existing well to the present day.

Sometime after being left alone, the white dragon Therragorn came to him. Therragorn befriended and asked him to help hide her from hunters, who were killing off the white dragons for armour.[19][20] He assisted by hiding her in some ruins in the Dragonkin Laboratory, but the caverns he placed her in were not linked to the laboratory itself.

A Visit by Bob and Neite[edit | edit source]

A Visit by Hannibus[edit | edit source] 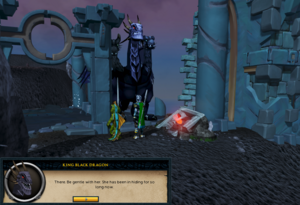 Hannibus, freed by an adventurer, desired to return to his home planet of Iaia. However, he had no idea on how to do so, as he did not want to get involved with the gods again[22], nor could teleportation and fairy rings bring him back home.[23][24] Hannibus accompanied the adventurer by looking into both the mysterious statues and dragons themselves, but did not find any answers. However, Hannibus was able to recollect memories of a white dragon that his mount had helped hide, and decided to pay a visit to him.[25]

Hannibus greeted his former mount, before the King Black Dragon noticed the adventurer alongside him, either recognizing them from previous encounters or as food if they had not fought before. Regardless, Hannibus asked him about a white dragon, which he affirmed he knew and took them out to the location where he hid Therragorn. His presence ensured that the two would not be attacked, and upon arriving, unlocked the entrance with a Dragonkin phrase before leaving. 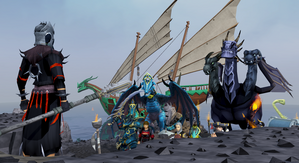 The assembled warriors prepare to attack the Shadow Reef.

Hannibus and the World Guardian, seeking to stop The Ambassador from unleashing a malevolent entity on Gielinor, visited the King Black Dragon again. They knew of the Ilujankan plight, surprised that Hannibus had returned.[26] Hannibus asked them to help fight the Ambassador, and they agreed. Being one of the very few dragons with self-control, Hannibus asked his former mount if he knew of any other dragons with such capability. He did not, having stayed in his lair for thousands of years and keeping himself isolated from draconic activity.[27] They soon departed to Daemonheim peninsula to ready themselves for battle, while Hannibus and the World Guardian visited Mr. Mordaut.[28]

Transcripts King Black Dragon is the author or co-author of:

A stamp featuring the King Black Dragon from a postbag