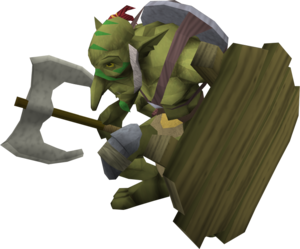 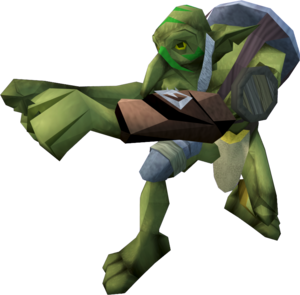 General Wartface is one of the Goblin Generals who has a liking for the colour green. He is found in the Goblin Village, which is near Falador and directly north of Doric's Anvils. Wartface is very rarely seen without his rival and co-general, General Bentnoze, with whom he consistently argues about everything from armour colours to what to eat. Wartface's favoured sergeant is Sergeant Slimetoes.

Wartface, along with Bentnoze, constantly picks on Grubfoot, a small goblin inside the general's huts. Despite this, the Generals are notably peaceful, for goblins; they rarely fight against other races, aside from the dwarves. The Generals were originally from different tribes, namely the Thorobshuun and Garagorshuun tribes. This is possibly why they do not agree on many issues.

General Wartface can be found at the Heimland Games area during the 2010 Christmas event, arguing with General Bentnoze over the correct colour of the Christmas tree fire and the seals.

An adventurer, who stumbled into the bizarre village, found the two generals arguing. Although they tried to dismiss them, the adventurer offered to help them out with their problem, and the generals agreed, believing that an outside party could help them decide. They requested they bring them orange goblin armour; once the adventurer returned, both generals forced their servant, Grubfoot, to wear it. After seeing the orange armour, both generals were not satisfied and requested that they bring blue armour, though they disliked it even more. They then requested brown (normal) goblin armour, and both agreed to use brown armour.

Investigating the caves underneath Lumbridge castle, the adventurer discovered a brooch dropped by what was suspected to be a goblin. The adventurer brought it to Reldo, and found a book detailing the twelve goblin tribes. Recalling the goblin generals they had helped earlier, they paid another visit to the generals and asked them about the Dorgeshuun.

The generals were unsure with what happened to the Dorgeshuun, with Wartface believing that they were sent to fight the "beardy-short people" (dwarves), and Bentnoze believed they were fighting humans. Regardless, the adventurer showed them the brooch, and both generals agreed that goblins never wore jewellery. After realising the Dorgeshuun did not know who won the wars, Wartface taught the adventurer the Goblin Bow emote, stating that it was how the tribes greeted each other in the old days.

He, along with Bentnoze, represents goblinkind on the Secret Council of Gielinor, though as usual they fight each other over who gets to sit in the chair. He is present when the Culinaromancer is freed during Recipe for Disaster and is subsequently frozen in time. In order to save them, they must be served slop of compromise, a mixture of food liked by both generals.

The Dorgeshuun began construction with the dwarves with a rail system intended to unite the cities of Dorgesh-Kaan and Keldagrim together. While the tunnel was being constructed, the Dorgeshuun found various artefacts inside, temporarily halting construction. The adventurer assisted the Dorgeshuun in the excavation efforts, and found an ancient mace. The Dorgeshuun were unable to decipher the text due to their complex system, and the local scribe recalled the adventurer had spoken to some surface goblins before, and asked them to bring it to them so they could examine it.

The adventurer then brought the mace to the generals, who were surprised the Dorgeshuun were able to find one. Wartface stated that the strongest goblin warriors carried these maces, and that without the Big High War God they were nothing. When Grubfoot stated that she was a goblin, Bentnoze ordered him to shut up, but Wartface stopped him, allowing Grubfoot to speak. Grubfoot stated that she was the Chosen Commander. Bentnoze believed otherwise, as she wasn't a proper goblin, but Wartface reminded him that the Big High War God would punish them if Grubfoot was telling the truth.

Zanik attempted to speak to the goblins, but was jeered at due to her vastly different beliefs from them. H.A.M. agents then began killing the goblin crowd, forcing the goblins to scatter. When the adventurer dispatched the agents on the watchtower, Sigmund had captured Zanik and intended to have her killed by the rail system so the dwarves and Dorgeshuun would declare war on each other. Wartface offered Sergeant Slimetoes to help the adventurer, while Bentnoze offered Sergeant Mossfists; the two generals began arguing over who was better, prompting the adventurer to take both with them; the rescue was ultimately a success.

Eventually, Wartface and Bentnoze lost their servant Grubfoot, who was sick of their abuse and traveled to Dorgesh-Kaan to become Oldak's student. This saddened the two generals, as they no longer had anyone to order around.

Following Bandos' death, Wartface and Bentnoze traveled with the larger Bandosian group intending to kill the Dorgeshuun for their role in Bandos' death. The two generals served as spectators for the adventurer's fights.

If Yelps was spared, then the two goblin generals were given a new servant to order around.

General Wartface is a collector, showing an interest in Warforge's goblin artefacts. All artefacts donated to collectors must be unnoted. 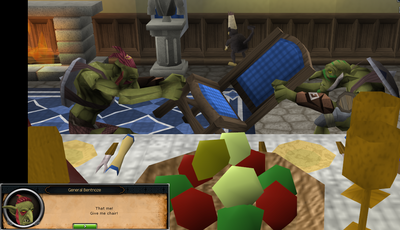 General Warface argues with General Bentnoze over a chair.