Mutated jadinko babies require 80 Slayer to harm and can be found in the Jadinko Lair, which is located east of Shilo Village on Karamja. The lair itself can be accessed through a hole in the cave roof. Although they do not drop the coveted whip vine, they are still hunted for their 100% drops of mutated vines and excrescence, which are used for making sagaies and bolas. In addition, they can drop high level noted herbs, including Snapdragon and Torstol, as well as noted logs. They can also drop ancient effigies, rare as they may be.

Killing these will gain you 3 favour points with the Jadinkos.

Mutated jadinko babies attack mainly with melee, but if the player moves out of melee range or activates Protect from Melee, they will also use magic attacks which consist of a vine coming out of the ground and hitting the player. These attacks are slow and inaccurate, but if they hit, they will usually hit hard. Despite their high max hit, mutated jadinko babies commonly drop various jadinko fruits that restore 800-2000 life points each and give various benefits (depending on the fruit). The fruit drops are so common that higher level players won't need to bring food for the few times that they do get hit. However, care should be taken for those who have low defence, as they have an unusually large amount of health and max hit for their level. They however, have a very low defence so it should be quite easy in killing one without taking too much damage. Players using Sagaies or other sorts of Ranged should be careful as they will start with a magic attack, and will get closer to you to attack with melee. 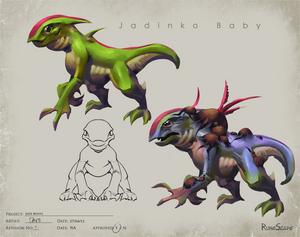 They are able to bind the nearby vines to attack you.

Ranging them is not advised as they look like a 2x1 monster, but are actually a 1x1 sized monster, making it able to pass through most safespots. Meleeing them is a better alternative.