From the RuneScape Wiki, the wiki for all things RuneScape
Jump to navigation Jump to search
The Old School RuneScape Wiki also has an article on: osrsw:Gargoyle
This article is about the Slayer creature. For the Ancient Summoning familiar, see Gargoyle (familiar).
For other gargoyles, see Gargoyle (disambiguation). 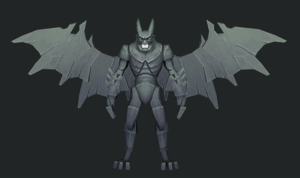 The updated Gargoyle model, currently this only exists within the Infernal Source Dig Site.

Gargoyles have drops which are often alched. The drop table includes a decent amount of salvage, both adamant and rune, at fairly high drop rates. Slayer-specific drops such as granite mauls and dark mystic robe tops can still be obtained. In addition, they can drop gems which can make them profitable to kill. This monster does not have access to the rare drop table. 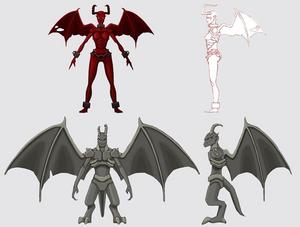 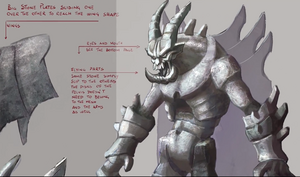 Gargoyles use melee attacks to fight, and require a Slayer level of 75 to kill. A rock hammer (or Darklight if it has been upgraded after Dimension of Disaster) is required to finish them off, when their health drops below 1,005 life points. This is done by right-clicking the gargoyle and selecting "smash", or automatically if the finishing blows ability has been purchased with 400 Slayer reward points. Alternatively, players may use the rock hammer or Darklight in their inventory on the Gargoyle, or be accompanied by a Legendary Pet that has activated the passive ability Slayer Finisher, in which the pet will deal the final blow to the Gargoyle when its health reaches 0.

Players who have purchased the Charming imp Dungeoneering reward are recommended to bring it to gargoyles. A spring cleaner, runes for casting high alchemy, or an explorer's ring 4, are also recommended, due to the frequency of rune-item drops. A gem bag (or its upgraded version or an Artificer's measure) is also useful due to the high drop rate of uncut gems. A Mask of Granite or Helm of Grotesquery can be used to receive a slayer task for Gargoyles once per day, and teleport to them twice per day.

Drop rates estimated based on 525,746 kills from the Drop Log Project, unless otherwise cited.

The average Gargoyle kill is worth 4,371 coins.