A crystal teleport seed is a small crystal that, after completing quests in the elf quest series, players can use to teleport to the elven village of Lletya, the Temple of Light, and the elven city of Prifddinas. Players must start either Mourning's End Part I or The Prisoner of Glouphrie to obtain this item, and they must start the former to charge uncharged seeds. Players can possess multiple crystal teleport seeds.

With level 85 Smithing and 4,000 harmonic dust, an uncharged teleport seed may be sung into an attuned crystal teleport seed at the crystal singing bowl in the Ithell district of Prifddinas. Attuned teleport seeds have unlimited charges. 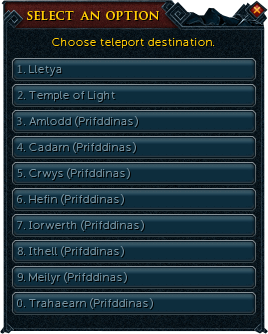 The crystal teleport seed has four right click options that can be unlocked after the appropriate quests have been completed (see below). The Prifddinas option opens a dialogue box that allows the player to teleport to any of the city's eight elven clan districts. Players may have to speak to Eluned in the forest south of Lletya (not via the NPC contact spell) if their crystal teleport seed is missing any right click options that should be unlocked. Talking to Eluned at the Prifddinas location does not grant the Temple of Light teleport. This will only work when carrying one seed; carrying multiple seeds will prevent the teleport from being added.

If the player has completed The Light Within, Eluned is no longer in the game and is replaced with Islwyn. However, speaking to him in the forest south of Lletya gives no dialogue option regarding the crystal teleport seed. Players need to speak to Islwyn at the Ithell Clan district in Prifddinas near the singing bowl instead. Here, he will speak to the player about chanting the crystal with new teleports.

The elves Eluned (Islwyn after The Light Within) or Ilfeen can be paid to recharge crystal teleport seeds. This method of charging adds eight charges to the seed. The cost of recharging with elves decreases after each recharge. The recharge count is by player, rather than by crystal. These elves can recharge more than one crystal at once, and they are able to charge them in their noted form. Partially charged crystals cannot be recharged. While there are several places where players can meet Eluned or Ilfeen, the recharging service can be completed anywhere by using NPC Contact and talking to Eluned / Islwyn.

Only elf warriors in Lletya drop the crystal teleport seed, not the ones at the Elf Camp.

The junk percentage and experience gained depends on the number of charges remaining on the crystal. Uncharged crystals cannot be disassembled.