Kuradal is the third highest level Slayer Master, the daughter of Duradel, and the current holder and seller of the Slayer cape. She is found in the Ancient Cavern, which requires partial completion of barbarian training to access. Players need at least 75 Slayer and a Combat level of 110 or more to obtain a slayer assignment from her. She keeps many of the monsters she assigns in a nearby dungeon.

The easiest way to reach her is by using a ferocious ring, which teleports directly to Kuradal and may be obtained as a drop from any of the monsters located in her dungeon. Alternatively, she may be reached through the fairy ring network using the code BJQ. However, this fairy ring must first be repaired using 5 bittercap mushrooms. This area can also be accessed via running south of Barbarian Assault minigame and diving off the pier.

Kuradal was born to Duradel and a yet to be revealed mother. When speaking to her about herself, Kuradal reveals that she has been engaged in combat training since childhood, and trained in Slayer from a young age, under her father. She remained very close to her father, but both are competitive, and she sought to be the best, even to surpass her father. She accepted the position of a Slayer Master, and now she offers Slayer challenges greater than those offered by her father. After completion of Ritual of the Mahjarrat, Kuradal reveals that she was at the ritual plateau fighting the Mahjarrat, their minions and Glacors. Kuradal is angry that she was not the one to kill Lucien, who killed her father, Duradel, and wishes to get vengeance upon the Dragonkin for taking her rightful kill.[1] Kuradal was also present in the Necrosyrtes vision, in which Draynor Village was attacked and Sir Tiffy died. This may indicate that Kuradal will have a role in future Dragonkin content.

In Festival of the Dead, she revealed that she would go out at night to slay tougher and tougher creatures to surpass her father when she was a child. At some point, Kuradal's mother and father separated; she had completed many preparations to bring her father and mother back together, before Duradel's death, and regretted not making these preparations sooner, to bring her parents back together while her father was still alive.

Kuradal also seems to be good friends with Morvran. Morvran reveals that he met her during one of his travels outside Tirannwn, and Kuradal showed him much about the rest of the world. In return, Morvran taught her the many secrets that were closed off. Sometime after the restoration of Prifddinas, Kuradal began supplying Morvran monsters for his dungeon.

Completing 50 tasks assigned by Kuradal grants an average of 28.8 points per tasks, if Smoking kills has been completed.

. For Kuradal, assuming all possible assignments are available,

Preferring a task makes it approximately twice as likely to be assigned, for the first assignment choice, but does not affect the weighting of the second assignment choice provided by a Slayer VIP ticket.[2] 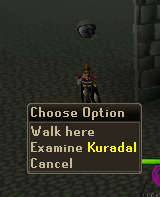 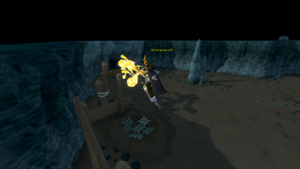 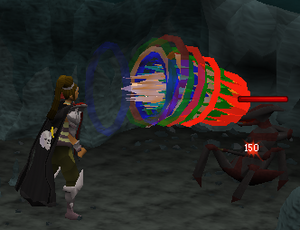 The old version of Kuradal's magic.