From the RuneScape Wiki, the wiki for all things RuneScape
Jump to navigation Jump to search
The Old School RuneScape Wiki also has an article on: osrsw:Islwyn

Islwyn Cadarn is an elf who serves as the main character in the Roving Elves quest. He is the son of Eirlys Cadarn and the grandson of Queen Glarial and King Baxtorian. He used to be rather hostile towards humans and gnomes due to what he perceived as the desecration of his grandmother's tomb, as during the Waterfall Quest the player removes his grandmother's ashes from their tomb. During the Roving Elves quest, players agree to plant a crystal tree within the Waterfall Dungeon so that the ashes are properly protected in their new location. The player's aid in the consecration of his grandparents' new tomb changed his attitude, and Islwyn will be considerably more cheerful.

Upon completion of Roving Elves, he will sell players new Crystal equipment without the need of crystal seeds. He will sell players a new crystal bow for 1,000,000 coins or a new Crystal ward for 1,000,000 coins. The "new" bow or shield can be traded until it is used once. After The Light Within, he will additionally enchant crystal items in Prifddinas and will also enchant crystal teleport seeds to allow travel to the Temple of Light in the event that the player didn't let Eluned enchant it before The Light Within.

Despite his heritage, he has no desire to take over leadership of the Cadarn Clan, happy to let Arianwyn continue leading for his role in resisting Lord Iorwerth. 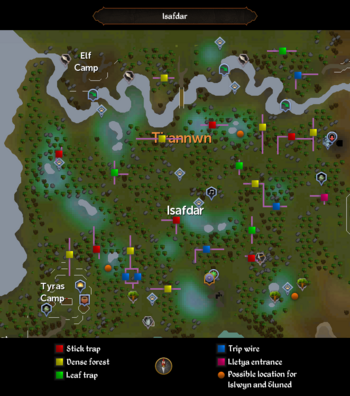 Islwyn can be found roaming the forests around Tirannwn with his companion Eluned, going between the magic trees outside Lletya and the clearing north-east of Tyras Camp (You can go to one of them, if Islwyn isn't there, switch worlds until you find him). One can find him by taking a charter boat to port Tyras, running north, going through a dense forest obstacle, then slightly east and south across a stick trap to reach the clearing or by teleporting to the Tirannwn lodestone, running north-east, through the obstacle, and then run south.

After The Light Within, Islwyn can also be found in the Ithell Clan district of Prifddinas, replacing Eluned. There, he will recharge crystal seeds for players in her stead. If players chose not to sacrifice Eluned in the quest, he will also give players a Letter from Eluned.