From the RuneScape Wiki, the wiki for all things RuneScape
Jump to navigation Jump to search
The Old School RuneScape Wiki also has an article on: osrsw:Balfrug Kreeyath

Balfrug Kreeyath is one of K'ril Tsutsaroth's bodyguards, along with Zakl'n Gritch and Tstanon Karlak. He attacks with Magic by launching massive fireballs at the player and has a max hit of 750 damage. Judging from his examine description, the demon destroyed the desert city of Ullek during the God Wars.

Balfrug Kreeyath also counts as a black demon for Slayer tasks. As a demon, he is weak to the power of Silverlight and Darklight.

Kreeyath's origins and history remain largely uncertain. He presumably arrived in Gielinor from the Infernal Dimensions at some point during the Second or Third Ages, and was a strong follower of Zamorak during the God Wars. Kreeyath perhaps rose to fame during the Kharidian Desert Campaign of 3,000 to 4,000, as a huge number of deities and factions fought to claim the Kharidian Desert.

The Defeat of Uzer at the hands of the demon Thammaron, coupled with the general violence of the Northern Kharidian Desert Campaign, warned the city of Ullek of the potential danger it was in. Shortly after the Mahjarrat Azzanadra destroyed the remnants of Thammaron's army, Kreeyath and a huge number of Zamorakian followers (possibly including the mostly independent forces of Lord Lowerniel Vergidiyad Drakan, lord of vampyres) laid siege to Ullek, which was one of the last great civilisations of the Second Age still in existence at the time.

The people of Ullek were prepared for the invasion, and fought Kreeyath and the rest of the invaders with human and elite clay golem soldiers. However, despite the city's strong military and natural geographical defences, Ullek was defeated with general ease. A number of the city's residents managed to escape through the city's complex tunnel network, through which they fled to the small city of Sophanem near the Southern Sea. During the course of the battle, Kreeyath earned his title "Despoiler of Ullek."

At some point after the Battle of Ullek, Kreeyath worked as a bodyguard alongside Zakl'n Gritch and Tstanon Karlak, two fellow demons, under K'ril Tsutsaroth, one of Zamorak's most powerful and loyal generals. Near the end of the God Wars, Tsutsaroth led Zamorak's forces at the battle for the Godsword in a large cave in what is now Troll Country. Kreeyath helped to lead the forces within the tunnel against Saradominist, Bandosian, and Armadylist military. During the course of the battle, however, a spell caused the already frigid cave to freeze over, leaving Kreeyath and the rest of the battle's combatants frozen for millennia.

In 169 of the Fifth Age, tectonic movement within the Wilderness caused the dungeon's temperature to rise slightly, allowing many of its combatants to escape their frozen state. Amongst these was Kreeyath, who under Tsutsaroth continued a battle that had been halted for over 2,000 years during the Third Age. Although the battle was noticed by the dwarven explorer Nestor Peregrine, from Keldagrim, and the Temple Knights, the battle continues to this day, and Kreeyath still fights to obtain the Godsword, not knowing that the God Wars are over. Like many others, Kreeyath seems to be severely weakened by being trapped in ice for so long. 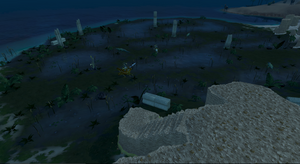 All bodyguards have a 1/128 chance to roll on to the "bodyguard unique" table, which includes all rare items unique to each faction except godsword shards (which are not unique), godsword hilts (which are only dropped by each faction's general) and Warpriest armour pieces (which can be dropped by all monsters in the same faction). Then, for Zamorak bodyguards, each unique has a 1/512 chance to drop. If no uniques are rolled, then you'll get 1,000-1,500 coins instead.[d 1]