A barrel of naphtha is used in the Regicide and Mourning's End Part I quests. It is used as an explosive and as a solvent, respectively. Unsurprisingly, a Barrel of naphtha is tied for the heaviest item in RuneScape, along with Stone Slab and Big rock weighing at 32 kg, and letting a player hold 896 kg of weight, with a full inventory.

You first need an empty barrel, which spawn in the Tyras camp, reachable by taking a charter ship to Port Tyras, and in the apple orchard south of the Tree Gnome Stronghold and west of the combat training arena. You may want multiple if you fail and do not want to return to refill the barrels. You then need to fill the barrel(s) with coal-tar, which you can do at the swamp directly south of the Tirannwn lodestone, giving (a) barrel(s) of coal-tar. (Right-click the water near the shore to find the correct spot - there is no visual indication as to where it is.)

You need to distil the tar into naphtha, for which you should bring 10 pieces of coal to the large fractionation still outside of the Chemist's house in Rimmington. Note that you may not succeed, but it is easier to mess up the pressure part than the heat part - so you shouldn't need more than 10 pieces of coal. You may also need to refill the still with coal-tar. You can either bring multiple barrels or take the same empty barrel back to the tar swamp as it is only a short distance from the lodestone.

To use the still, use the barrel of coal-tar on it to fill it. (Recommended to follow the following instructions exactly, as this is quite fiddly.) Click the right side of the tar valve twice. You should see the 'pressure' indicator on the left go up. When the indicator reaches the green region, click the right side of the pressure valve on the left once to let out pressure. (If you let it reach the orange region, you may have to click the valve to release pressure twice.) This should keep the pressure dial in the green region. Now you should start to add coal. Add 3 pieces to start with. Note that the heat cools over time, so add a piece of coal when the dial stops increasing, but do not add any when it is inside the green region - wait for it to cool below first. If it reaches the orange region it will fail and you will need more coal, but it is easy to avoid reaching that. When the bar along the bottom is full, and both dials reset, close the distillation window and your barrel will be filled with the naphtha. 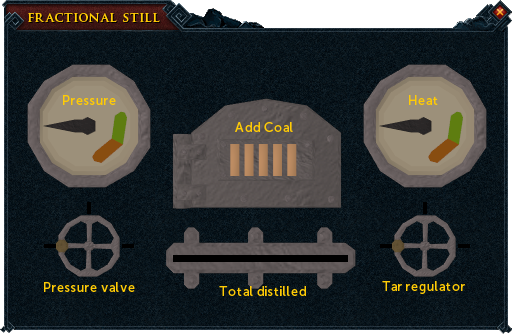 The interface when making a barrel of naphtha

This information has been compiled as part of the update history project. Some updates may not be included - see here for how to help out!
Retrieved from ‘https://runescape.wiki/w/Barrel_of_naphtha?oldid=35652616’
Categories:
Hidden category: