Mourning's End Part II (The Temple of Light) is the seventh quest in the elf quest series. This quest is often perceived as being extremely challenging, owing to it having arguably the most difficult quest puzzle in the game, being comparable to Elemental Workshop III.

Back to the Mourners[edit | edit source]

After infiltrating the mourners, return to Lletya to speak with Arianwyn. Report that they are seeking access to an old temple, to which Arianwyn shockingly realises that they have rediscovered the Temple of Light and that you need to stop them at all costs. Agree to do so and return to the mourner base to see whether the key required to access the adjacent tunnels is ready yet.

Return to the Mourner Tunnels. The entrance is located in the north-easternmost house of West Ardougne - having full mourner gear equipped is required to enter. If a guard tells you that only "regulation gear" is allowed, un-equip all items and re-equip the mourner gear. Once downstairs, speak to the head mourner. He will inform you that the guard has finally returned with the key he had to forge, albeit with ten times as many as needed. You will ask about the task he was going to give you, and he will ask you to find out what has happened to a missing dig team. He will also warn you about powerful beasts that the diggers have accidentally disturbed before giving you the key to the tunnels. This key may be placed on your key ring, which you should do as you'll need it in later quests. If you lose it before adding it to your key ring, you may search the head mourner's desk for another one. 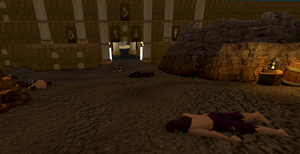 Open the door and head west. Be careful when passing the dark beasts, as they are powerful creatures. Eventually, you will reach the entrance of a very large structure; the Temple of Light. Watch out for the pair of aggressive shadows lurking here; they hit high, but only have 100 life points, so they can be slain easily. You will also notice several corpses lying around as you approach the temple, both dead mourners and slaves. Search them to identify them as the dead dig team. You will realise you have to tell Arianwyn while keeping the head mourner in the dark.

One of the dead mourners will carry a colour wheel and his journal. Read it to find out his identity, Nissyen Edern. The journal details how he joined the mourners and left Prifddinas for West Ardougne. The colour wheel will become necessary later on.

Before returning to Arianwyn, ascend the stairs that are west of the entrance where you found the dead bodies and head south until you reach a ladder going up. Ascend these and head north again, going around two sets of stairs. Then, head east until you are right above the entrance to the temple. There is a darkened crystal here; search it and choose to chisel off a piece when given the option. Now you should return to Lletya.

Into the Light[edit | edit source] 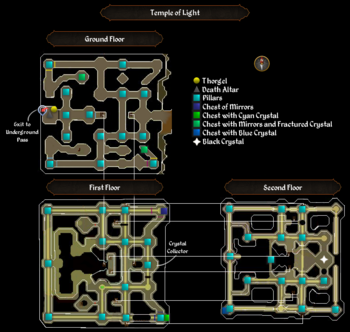 Arianwyn will realise that the safeguard of the temple, built millennia ago to protect an ancient altar, has failed, which means the shadows have become free to roam outside its perimetres. He will ask you to return to the temple to find the darkened crystal, and return a sample of it to him.

Arianwyn concludes from the sample that a skilled crystal chanter should be able to make a replacement so he summons Eluned, who will agree to chant a new one. Use the sample on her to show it to her and she will proceed to create a replacement. Speak to Arianwyn again, who will tell you that you need to reach the altar in the temple and imbue the newly made crystal with its power, then placing it into the original crystal, thus restoring the safeguards and preventing the mourners from accessing the temple.

Return to the Temple of Light. You now have to reach the altar, but the entrance is blocked by an impassable door of light. To open it, you will have to direct a light beam to it. This, however, is not as easy. In order to be able to do this, you will first have to unlock several other doors by directing beams of light at them in order to get the crystals and mirrors necessary to make the light beam reach the final door. Beware of the shadows while doing this. Several important things to note: 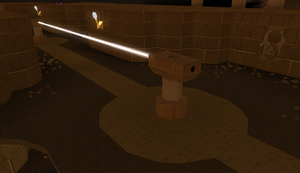 The crystal collector (right, on the wall) and the light emitting pillar.

Upon returning to the Temple, ascend the stairs and head to the crystal collector to the east. Pull the lever. You might have to adjust your camera angle to see the lever protuding out from the wall. The area in which the option is given to pull the lever is quite small. Next, click collect. You will receive four hand mirrors and a yellow crystal. Yellow is complementary to blue according to the colour wheel, so you will have to use it to unlock the blue door. Since you are provided with only four mirrors, the light beam's path will be relatively short. After finding the blue door, use the mirrors and the pillars to direct the light beam (coloured yellow by the crystal you placed inside one of the pillars) onto it, thus making in passable.

Think like this while solving the puzzle. Sometimes, you will need to use multiple crystals to mix colours in order to open a certain door. Below is a step-by-step guide of how to unlock each door, but you should be able to work it out yourself using the above tips. 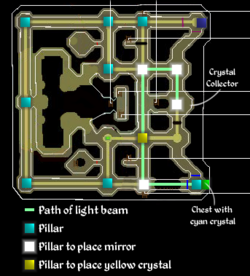 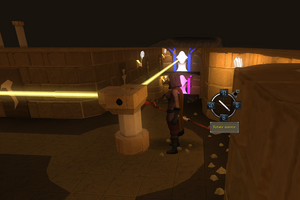 The blue door, guarded by the infamous handholds. 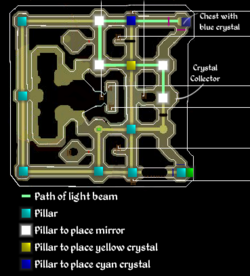 Go back to the crystal collector and pull the lever. Collect all of the items (8 total). You should now have 2 crystals (yellow and cyan) and 6 mirrors. Should you not be able to collect the crystals and the mirrors from the tray by pulling the lever, the problem can usually be solved by climbing down and up the nearby stairs (resetting the floor). Click down, then click back up the stairs, when you run towards the Crystal collector click to open it before you get to it, this allows the proper menu to load. 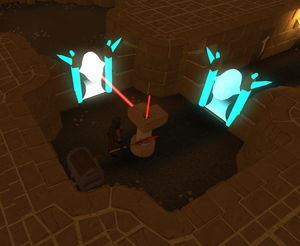 Go back to the crystal collector and collect all. (Alternatively, you can not reset/collect and just alter the setup for the Magenta door (see quick guide)

Do not reset the maze yet as most of the mirror setup for the cyan door is needed for the next step of unlocking the yellow door. 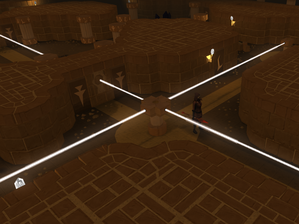 Using the fractured crystal to split the beam.

You now need to open two doors, a new magenta door and a new yellow door using the fractured crystal. Go back to the crystal collector, pull the lever and collect all of the items (14 total). 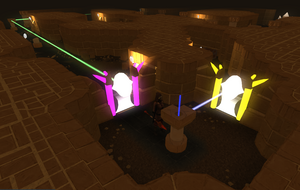 You now need to open two doors: A new cyan door and a huge black door, using everything you have (13 mirrors, 5 crystals and one more green crystal which is already placed in a pillar). Go back to the crystal collector and pull the lever, collecting all of the items.

The green beam then passes into the pillar to the west. A mirror is already placed in that pillar, so the beam is reflected down to the ground floor, and then reflected into the final pillar.

The pillar in the middle of the room has a mirror fused into place, reflecting the red light beam into a pillar on the ground floor, and then into the cyan door. 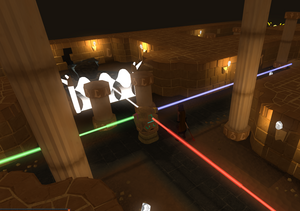 The three light beams merge into a single white beam, unlocking the door to the Death Altar. 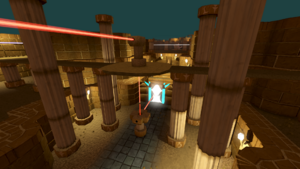 The light configuration for the penultimate door leading to the death altar. 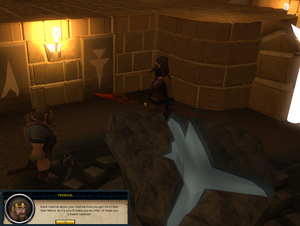 You finally reach the Death Altar and meet Thorgel, who offers you a death talisman.

Important: You can skip this section if you already have a death talisman, omni-talisman, or a wicked hood fed with either. Just enter the death altar and skip to the next section.

After passing through the black door, you notice the dwarf Thorgel standing next to the entrance. You'll ask each other how you got to the altar, and he will reveal there is a passage from the Underground Pass created by him and his companions. You will ask if he knows Klank, after which he will realise you are the one who slew Iban. Because of this, he agrees to trade you a death talisman in return for some supplies.

He gives you an item list that tells you what you need to get him. If you bring Thorgel each of the fifty items on the list, he'll give you a death talisman. You can give these items to Thorgel in multiple trips; only a pack yak or a friend will allow you to bring the items in one trip. Note: if you use a pack yak, you won't be able to bring it through the Underground Pass.

If you teleport away to get supplies, make sure you turn the mirror back towards the cyan door! Otherwise, you'll lock yourself out of the entrance to the altar, and you'll have to go through the Underground Pass and enter the tunnel near the dwarf camp, or redo the final puzzle. You can't teleport to the altar with a teleport tablet or wicked hood until the quest is complete.

Again: if you teleport away, make sure you turn the mirror back towards the cyan door! 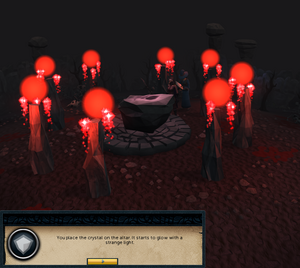 Placing the crystal atop the Death Altar

Once you have obtained a death talisman or equivalent item, use it to enter the death altar. Once there, use the newly made crystal on the death altar to imbue it with death power(Note this does not change the name). Leave the altar and take the imbued crystal to the black crystal on the top floor and place it there to restore the temple's safeguard.

Finally return to Arianwyn and report your success. He will be content, stating that the Temple would no longer be accessible by the enemy for thousands of years. He will be surprised to hear of Thorgel's presence at the death altar, however. Nevertheless, he is confident that the mourners are never going to enter the Underground Pass, fearing it immensely as a result of a long ago battle, and prepares to send an envoy to the dwarves to discuss an alliance. He rewards you for your efforts by giving you a crystal trinket, which allows you to enter the Temple of Light safely in spite of the restored security. 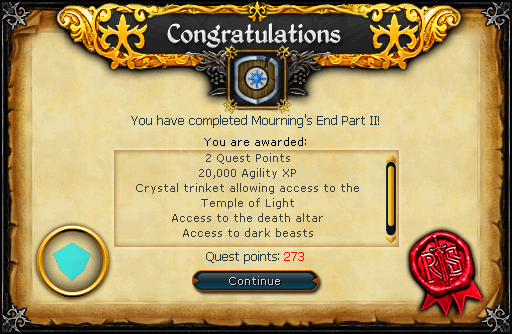 A trapped shadow behind a pillar.