From the RuneScape Wiki, the wiki for all things RuneScape
Jump to navigation Jump to search
For the achievement, see The Magister (achievement).
Loading...
In combatNPC
Oreb? (edit)? (edit) 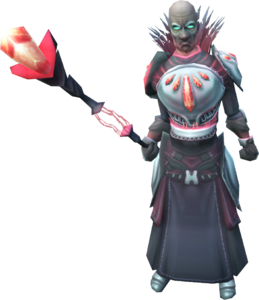 Oreb, the Magister of House Charron, is a necromancer from the human home world of Teragard and a solo Slayer boss. He may be found in the First Gate of the Grim Underworld, accessible from the Sophanem Slayer Dungeon. Unlike the other inhabitants of the dungeon, a feather of Ma'at is not required to kill him. Killing the Magister rewards 450 reputation towards your aligned district.

To fight the Magister, level 115 Slayer and a key to the Crossing is required. Although the Slayer requirement may be boosted, unlike the Legiones, the boost must be maintained for the duration of the encounter. The soul obelisk inside the dungeon must then be activated to summon him. Keys can be obtained by killing the inhabitants of the dungeon (including himself) or by buying them from the Grand Exchange, costing 414,219 coins. The key is consumed when beginning the fight and will not be returned on death if the Magister wins, behaving in a similar manner to ascension keystones.

Killing the Magister is a possible Soul Reaper assignment. The assigned number of kills can vary between 3 to 14.

Acquiring at least one of each of his unique drops is a requirement for the [Name] of the Crossing title.

Oreb also appears in The Shadow Reef Elite Dungeon as a miniboss, in the form of Oreb, the Magister.

Oreb was originally the magister of House Charron on Teragard and at one point authored a book known as The Divine Delusion. Fascinated with the subject of the soul, he speculated in his book that it had little to do with divinity and that it may be possible to transplant a soul from one host into another.

At some point in or before the Fifth Age, he was apparently exiled from Teragard and arrived in Gielinor, where he took in Nomad as his pupil, teaching him about the nature of souls. Nomad eventually betrayed and supposedly killed him, using his new understanding of souls to bolster his own power. Due to his own knowledge on souls, Oreb survived, reviving himself via phylactery. 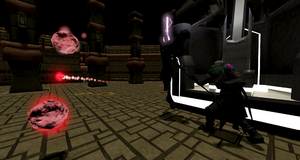 Oreb is "killed" by Nomad.

After being betrayed by Nomad, Oreb eventually found himself in Menaphos. From there, he began his own experiments on souls, and gave his thoughts on both Amascut and Icthlarin; fascinated with the former's corruption, although disappointed by the fact that it weakened the souls he acquired. He felt a sort of kinship with the latter, sensing an ancient guilt and wondered if the god was aware of the power that was around him. While working, he also discovered machinery that could split a being's soul while they were still alive, and fragments of a divine soul, speculating that one could send proxies all around the world to obtain memories before combining them into one entity if the method could be perfected.

In his last journal, he learned of terrible events in the past; though upset with how messy the magic was, he realised that he could achieve a goal he thought impossible thousands of years ago. He also interpreted the arrival of a particular adventurer as a success for his experiments, and although he was slain by the said individual, he revived himself with a phylactery.

Sometime after this, Oreb was visited by The Ambassador who offered to bring him back to Teragard and restore his house. Oreb was naturally inclined to accept, since it was his House, but was surprised that it somehow knew of his origins.[1] The only cost to him was to supply the Ambassador with souls, something which he could easily achieve. Oreb was also intrigued with the Ambassador's origins, as its soul was something that he had never seen before in his life.[2] Oreb departed to Ulthven Kreath, knowing that his former pupil was about to make his move.[3] There, he provided the Ambassador with ten thousand souls, ripped from the afterlife.[4]

During his stay, he met Lady Himiko, who he initially believed to be a manipulator due to his lack of faith.[5] The two wrote a series of letters to each other regarding the security of the dungeon. Oreb was aware that there was a spy in her ranks[6], though Himiko refused to believe that.[7] Oreb pointed out that the wards were intentionally flawed, allowing the World Guardian access into the inner sanctums.[8] Himiko did not respond, so Oreb wrote to the Ambassador, warning him not to underestimate the World Guardian, as they had slain him numerous times.[9] His warning was heeded, as the Ambassador created the Crassian Leviathan in anticipation of their arrival.[10] Despite this, the Leviathan was unable to stop the World Guardian, who proceeded to infiltrate the underwater temple. Oreb attempted to stop the World Guardian, but was slain by them during the attack. He eventually revived himself with a phylactery, though his plans were ruined as the Ambassador was slain shortly afterwards.

Oreb later returned to his chambers when he was confronted by Vengeance, as Bilrach deemed his knowledge on soul magic essential for his plan. Oreb immediately took note of the warrior's darkness and rage, but she refused to let him study her and demanded that he give the knowledge her master sought. Oreb, confident in his skills, refused and warned her to leave, but she instead took it as a challenge and fought him, easily overpowering him. He promptly yielded and was forced to give his knowledge to Jerrod.

The Magister has several special abilities, one of which consists of activating a soul obelisk that drains the player's Constitution level, which affects both the amount of life points food can heal when eaten in addition to the player's maximum life points.

Although he counts for a Soul devourer assignment and awards Slayer experience upon defeat, the slayer helmet does not apply its damage and accuracy buffs against the Magister even if the player has a soul devourer assignment, to balance out the corruption mechanic. However, Tuska's Wrath will still behave as it normally does on a Slayer assignment.

Transcripts The Magister is the author or co-author of:

There were several teasers hinting towards the Magister in the weeks before its release. Most of them have taken the form of in-game messages which were triggered as a result of the players' actions as a community.[13]

After several teaser message broadcasts, more activities were unlocked for players to engage with within Menaphos that allowed city reputation to be gained in ways beyond the traditional method of training skills within the city. These activities took the form of repeatable events that could be completed numerous times a day for reputation, and are still currently available to be completed for city reputation.

The Magister was originally planned for release on 26 June 2017, but this date was pushed back to 3 July 2017 to allow for further testing and addition of more quality of life improvements for Menaphos.[14] 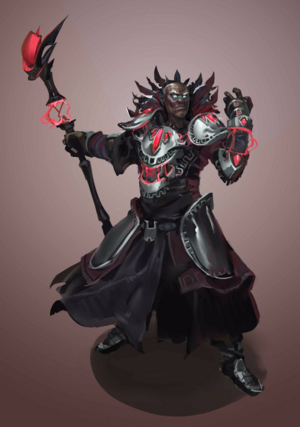 Concept art of the Magister