RuneScore is a points system used to measure completed achievements. It was added on 29 August 2017 and can be viewed by clicking the Hero icon in the game interface. Most achievements have an assigned value between 5 and 75, in multiples of 5. Upon completing the achievement its value is added to the player's RuneScore. 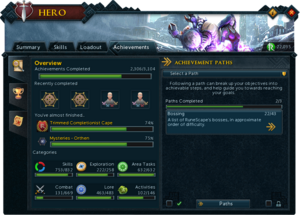 RuneScore is displayed in the top-right of the Hero interface

Of the 3,185 achievements, 667 do not award RuneScore (0 value) due to being heavily luck-dependent, such as Skilling Pets, Boss Pets, or Feats achievements.

On 10 September 2018, RuneScore was added to the HiScores table; it can be found in the Community tab and on the RuneScape website. A minimum of 500 RuneScore is required to appear on this HiScore.

The same update removed all RuneScore awarded from dynamic achievements that typically need to be completed again upon the release of new game content. This is to ensure that players' RuneScore do not decrease when new updates with additional requirements for those achievements are released. The affected achievements were Completionist Cape, Trimmed Completionist Cape, Master Quest Cape, To Be a Master, Music Maestro, The world is a safe place, Final Boss, Insane Final Boss, The Elite, and Reaper Crew.

Zez is a pet which can be used to display RuneScore and achievement count.

This information has been compiled as part of the update history project. Some updates may not be included - see here for how to help out!
Retrieved from ‘https://runescape.wiki/w/RuneScore?oldid=35919851’
Category:
Hidden category: