From the RuneScape Wiki, the wiki for all things RuneScape
Jump to: navigation, search
This article is about the slayer monster. For other uses, see Nightmare (disambiguation). 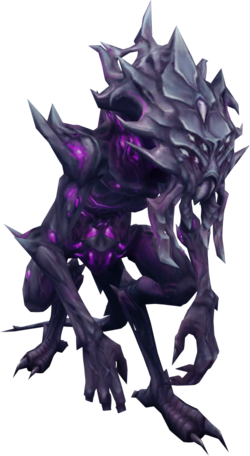 Nightmares are Slayer monsters that are created from Mah's nightmares during Children of Mah. They require level 80 Slayer to be harmed. To be assigned as a task, the player must purchase the ability from a Slayer Master for 50 Slayer points.

Nightmares can be found in Freneskae through the World Gate by utilising the ritual site option.

Nightmares attack with melee. The melee attack is not particularly powerful and can easily be countered by Soul Split. Nightmares are capable of running, and they will often force the player out of the tile they are standing on due to this.

After five auto-attacks, the nightmare will use a ranged attack that can deal up to 4000 damage in two simultaneous hits. This attack is signalled by the nightmare creating a black sphere in their hands before tossing it at the player. The damage from this ranged attack can be reduced to under 1000 with Protect/Deflect Missiles. The player has at least 1.8 seconds to react accordingly before the damage registers. If the nightmare dies after beginning its special attack, the attack deals no damage.