From the RuneScape Wiki, the wiki for all things RuneScape
Jump to navigation Jump to search
Merethiel? (edit)? (edit) 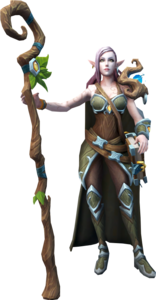 Merethiel is an elf who is involved in the Solak boss fight. She joins players inside of the boss room as both a supportive combatant and a key figure in certain phases of the fight. She is the sister of Erethdor, whom she, her other siblings and Solak fought against when he attempted to take the Lost Grove's power for himself.[1][2] The incident took a toll on Merethiel; she fell into a deep depression, tormented by the guilt of her brother's actions. As time passed, she attempted to reunite with her siblings, but having spent so long in the grove, she was unable to do so and returned. She began to feel tempted by the magic that had driven her brother mad for power but eventually came to terms that he was gone.[3][4]

By the fifth year of the Sixth Age, Erethdor had gained complete control over Solak, prompting Merethiel to begin recruiting powerful adventurers in order to free him and destroy her brother once and for all. They eventually severed Erethdor's influence over Solak after an intense battle, after which the two set out to undo the damage Erethdor had caused to the Lost Grove.

During the battle with Solak, Merethiel is shown to possess a combat level of 7,000 and 1,000,000 life points, though she plays a supporting role in the encounter.

If the player has defeated Solak 1,000 times, Merethiel will give the player a pet version of her Perdita as a reward.