From the RuneScape Wiki, the wiki for all things RuneScape
Jump to: navigation, search
The Old School RuneScape Wiki also has an article on: osrsw:Abyssal demon
For other uses, see Abyss (disambiguation). 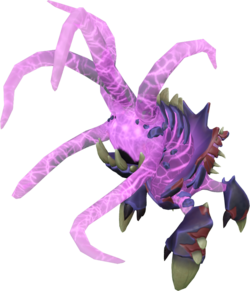 Abyssal demons are a type of demon players encounter as part of the Slayer skill, requiring 85 Slayer to damage. They are famous for their unique drops of the abyssal whip, the abyssal wand, and the abyssal orb, which can only be received from abyssal demons. They are commonly fought for combat and Invention experience, as well as their unique and common drops. They have a special effect of short-range teleporting either themselves or the player they are battling on occasion.

Abyssal demons are among the remnants of the Chthonian race of demons. As revealed in Palkeera's memory, the Chthonians were once rulers of Infernus, and by extension all of demonkind after rising up and overthrowing their predecessors, the Infernal demons. They were said to be cannibals, actually eager at the idea of consuming their own kin, and they were able to steal the power, or essence, of whomever they consumed. Despite this, their culture is said to be highly based on rules and laws, and they formed a complex bureaucracy in stark contrast to the Avernic's tribal ways. They came to be nobles in both the Infernal dimension and under the Zarosian empire, but lived in 'distant luxury' that made them unaware of the brewing conflicts that surround them.

At length, the Mahjarrat Zamorak managed to sway many Avernic to his side in his secret coup against Zaros, promising to help them overthrow the Chthonians. After his success and armed with his newfound godly powers, Zamorak travelled with the Avernic demons back to Infernus to do just that. The Chthonian resistance was so fierce that even with his godly powers, it took Zamorak and his Avernic legions nearly twenty years to kill or banish every last Chthonian to the Abyss.

Chthonian demons now reside in the Abyss, for the most part. The abyssal demons found on Gielinor were originally summoned by a team of researchers in Viggora's Folly, who opened a portal to the abyss. The abyssal demons remain there to this day, also being found in the Abyssal Area and Kuradal's Dungeon. Kuradal also captured some of the demons for her own dungeon. 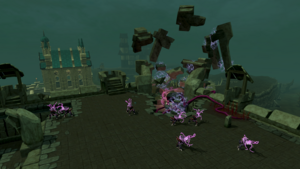 Abyssal demons in the Slayer Tower 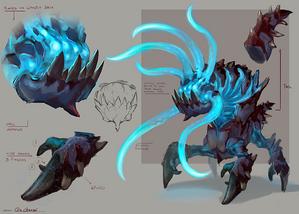 Morytania Slayer Tower dungeon can only be accessed with level 100 Dungeoneering (rewarding 35,000 dungeoneering experience on first entry). The Dungeon is located to the east of the Morytania Slayer Tower entrance. There are 8 abyssal demons in both the south-east and south-west rooms. There are 8 imps located in the south-west room (which have a chance to drop a champion scroll) with the 8 abyssal demons. 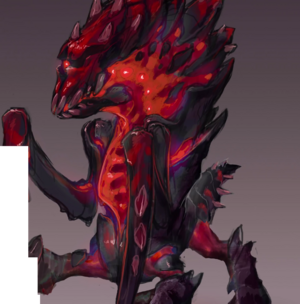 Kuradal's Dungeon can only be used while having a task from Kuradal, Morvran, or Laniakea. There are 10 abyssal demons in here and are all crowded together, making it quite easy to target another one. Players with 85 Agility can use one summer pie to bypass several rooms to make it quicker. Bank runs are somewhat cumbersome, so using Infernal urns and picking up the good drops is highly recommended to avoid waste of inventory space or ferocious ring charges. However, if a player has a pack yak familiar, they can use its special move to bank the ashes for a hefty profit. Quick access to here can be gained by the twice-daily teleports from the mask of the Abyss/helm of Warping, a ferocious ring teleport, or a fused full slayer helm with ferocious ring charges on it.

This Abyssal Area is somewhat unrelenting for most players. This area is usually empty of players due to the other aggressive abyss creatures that lurk in the area. Partial completion of A Fairy Tale II - Cure a Queen must be used to access this area as it needs the use of a fairy ring (ALR) to get into. Given the fact that the demons here are scattered, it is best to kill them in other locations.

Abyssal demons can be found in the Slayer Tower, six in the south-west part of the top floor and ten on part of the roof, which is accessible over an Agility shortcut. Twice a day, players can use the teleport in the Mask of the Abyss/Helm of Warping to teleport here.

If killing demons here without a Slayer task, players can get a Slayer contract for 30 or 200 kills, which will give 58.2 experience per kill for a regular contract, or 332.6 for a special contract. Players using the Tower's abyssal demons to complete their Slayer task can instead get a Special slayer contract, which will give increased experience per kill. It should be noted, however, that obtaining an off-task contract will not allow the player to obtain the abyssal wand and orb. Morytania legs 4 can also be used to further boost slayer experience.

A group of 17 abyssal demons are found south of the Graveyard of Shadows in level 17-19 Wilderness. This area also has a nearby Wilderness obelisk, and is in a multi-way area.

The Heart of Gielinor[edit | edit source]

A fair number of abyssal demons are found in Zaros' Bastion in God Wars Dungeon 2, located in the Heart of Gielinor. Use of a Shard of Mah or an equivalent Zarosian-aligned item is recommended so the player does not get swarmed by the other creatures in the area. Most of the abyssal demons are found up the stairs, close to the portal leading to Vindicta. This area also has Nechryael, as well as Ancient Warriors, Rangers, Mages and Blood reaver (Heart of Gielinor).