From the RuneScape Wiki, the wiki for all things RuneScape
Jump to navigation Jump to search
The Old School RuneScape Wiki also has an article on: osrsw:Eluned

Eluned Ithell is an elf travelling with Islwyn, teleporting between the south-western magic trees outside Lletya and the clearing north-east of the Tyras Camp. If she is not in one spot in a given world, it is possible to hop worlds until she is found. After completing Plague's End, she takes up permanent residence in the Ithell district of Prifddinas as well as in the forest. After The Light Within, she is replaced by Islwyn and cannot be found ingame.

She has roles in many quests. In Roving Elves, she explains elven burial customs and enchants a seed. She is also the starting point of Mourning's End Part I, informing the player that Arianwyn wants them, and of The Light Within, asking the player for help in reforming the goddess Seren.

The first incarnation of Eluned was made by Seren around the early First Age, at the same time as her twin sister Haluned. Whereas Haluned was sent to Gielinor to be Seren's eyes and ears, Eluned remained on Tarddiad where Seren used her to see life through the eyes of the elves. Unlike Haluned, Eluned was never meant to be a permanent extension of Seren, so Seren eventually reabsorbed her.

When the God Wars ended and Seren shattered herself into countless shards, one of the fragments with memories of Eluned somehow sang itself into existence. The second incarnation of Eluned had however no memories of Seren and was completely unaware of how she came into being. She was raised as an orphan by the Ithell Clan and thought herself to be an ordinary elf. During the next two ages she stayed with the elves in Tirannwn, eventually ending up travelling with the elf Islwyn. During this time she perfected the art of crystal singing and by year 169 of the Fifth Age could sing crystal Weapons and crystal teleport seeds without the need of a crystal singing bowl. She met, aided an adventurer in properly respecting the site where Glarial was buried, and later informed them when their aid was needed by elven rebels. When Prifddinas was reformed, she moved there and stayed in the Ithell district, where she helped create crystal equipment from seeds.

The Light Within quest[edit | edit source]

At the start of The Light Within quest when the city started to shake due to parts of it being created from Seren, she turned to the adventurer she had aided previously, asking for their help in reforming the goddess. During the adventurer's subsequent investigation, they discovered that Eluned was a part of Seren.

The player has a choice:

Seren could be reformed without Eluned. If Eluned is left out of the restoration and allowed to lead her own life, she leaves Prifddinas and travels to Tarddiad with the aim of helping the Crystal Shapeshifters and Angof and restoring the land to its former glory. She leaves Islwyn a letter for the adventurer, explaining her choice. 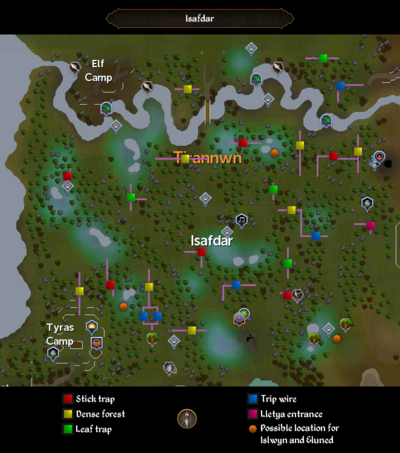 If you lose your newly made crystal during the Mourning's End Part II quest, Eluned is called on by Arianwyn to replace it.

After completion of Within The Light, Eluned can teach the player how to enchant the crystal teleport seed further, thus enabling it to teleport the player to the Temple of Light. Talking to her with a charged crystal teleport seed in inventory adds a right-click option to teleport outside the Temple of Light or to Lletya. However, this dialogue only occurs when you find Eluned travelling among the forest. You won't see this dialogue if you talk to her in Prifddinas. This teleport is very useful for reaching the Dark beasts near the Temple as well as the rune rocks.

After Plague's End she will be able to do numerous crystal singing in Prifddinas tasks for a fee :

To acquire the Temple of Light teleport after completion of The Light Within you will need to speak to Islwyn in Prifddinas.

At the start of Mourning's End Part I she will give the player a crystal teleport seed and recharge it for 150-750 coins but only if the seed is out of charges. She will also charge more than one at the same time and if you have not recharged your 5th yet she will tell you the prices of the 1st - 5th crystal she recharges and it will act just as if you recharged them one by one.

Transcripts Eluned is the author or co-author of: