From the RuneScape Wiki, the wiki for all things RuneScape
Jump to: navigation, search
"Deacon" redirects here. For the H.A.M. member, see H.A.M. Deacon. 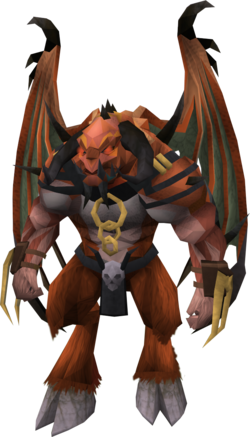 Demon bosses are encountered as part of the Demon Flash Mobs Distraction and Diversion. They serve as the main boss of the activity, although only one appears within each mob. It is protected by six imp heralds, four lesser demons and two black demons. Its name and, to some degree, its appearance is random, but the prefix and suffix of its name will affect its abilities.

Demon bosses are identified on the world map as

, an icon it shares with Elite Dungeons.

The demon boss will initially spawn at half of its life points, but will be unattackable until its lesser demons and black demons are destroyed. The demon boss will siphon life from these demons to recover lost health, hitting lesser demons for 3000 each hit (healing the same amount in the process) and hitting black demons for 6000 a hit. Players can slay the minions in order to minimise how much health the demon boss recovers and to attack the boss quicker.

Attempting to use prayers or curses, excluding Protect Item while fighting the demon will cause it to deal higher damage with higher accuracy when hitting you. Using Blood spells will also heal the demon. Using protection prayers with Devotion will not reduce or prevent damage and will be ignored. The demon will also heal 10% of the damage it deals, rounded up.

Its attacks can occasionally remove the effects of Resonance.

Demon bosses spawn 15 minutes after a notification is given out on where their energy is building up. If the demon boss is not killed within an hour upon spawning, it will despawn, leaving players with no loot if it does so.

They are classified as Greater demons; thus, killing them counts towards any greater demon Slayer task, and also allows a player to take advantage of the abilities of Slayer boosts.

The boss of a demon flash mob will have a prefix to his name. This prefix determines the attacks the boss will use mainly, or what it is particularly good at.

The boss of a demon flash mob will also have a suffix to his name. This suffix determines what special abilities this boss demon has.

A boss demon in a flash mob will have a main name, which can either be aligned to Zaros or Zamorak. This name doesn't have any further use.

Demon boss finishing off its own minions[edit | edit source]

In order to receive a drop, the player must deal at least 500 damage to the demon boss in a single hit; once this condition is met a notification will be given to the player that refers to it as a "powerful blow". The player must also stay in combat with the boss until it dies to be eligible for the rewards. If the player gets out of combat by any means, they will lose the ability to get the drop from the demon, and must deal 500 damage in a single hit again to be eligible for a drop. The demon boss must also have at least 40,000 life points left if a "powerful blow" is dealt; if it is below this, joining players will not be eligible for rewards.

A demon boss will always drop a minimum of five drops. A single player can receive five separate drops if they manage to defeat it alone. If two to four players defeat a demon, leftover drops will go to participants.