King Tyras Ardignas was the king of West Ardougne, a part of the capital city of Kandarin. Tyras and his brother, King Lathas, each ruled half of Ardougne, essentially giving the city two completely separate governments. During the Regicide quest, the player assassinates Tyras at the order of Lord Iorwerth, an elven lord from Prifddinas, by firing an explosive barrel onto his tent. General Hining, his immediate subordinate, later confirms his death. At the end of the quest, it is revealed to the adventurer that he wasn't the main antagonist in the quest, and that his brother, King Lathas, is the main antagonist and is serving the Dark Lord. According to the Making History quest, he is a Saradominist.

Tyras was born to King Ulthas Ardignas, the third king of Ardougne who ruled in the latter half Fifth Age. Little is known of Tyras's early life, although he and his brother Lathas Ardignas seemed to have a rivalry even at an early age.

In the year 136, King Ulthas was killed by a stray arrow during a hunting trip, leaving the job of leading his kingdom to his heir. He had two sons; Tyras and Lathas, who agreed that they could not rule the city alone. They agreed on dividing the city in half; Tyras would rule the west, while Lathas would rule the east.[1]

Tyras ruled West Ardougne for some time, not immensely popular but accepted nonetheless. The city grew under his rule, expanding further west to the nearly impassable Galarpos Mountains. As the city expanded west, a section of a small mountain on Arandar's edge was opened to make way for construction. This digging, however, uncovered the Underground Pass, an ancient elven tunnel system that had once connected the lands of Kandarin with the realm of the elves, Tirannwn. 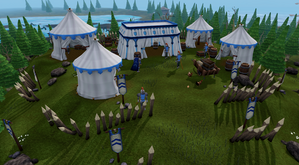 The final camp of King Tyras.

Tyras found the prospect of exploring Tirannwn impossible to resist. Taking a highly trained division of the Ardougne Army, King Tyras travelled through the Underground Pass, which at the time was largely abandoned.

Tyras, after spending some time in Tirannwn, temporarily returned to West Ardougne with his surviving men to recruit new soldiers and resupply. His time spent in West Ardougne was brief, though, and before long he returned to Tirannwn.

Shortly after Tyras left his steadily declining city, a major "plague" swept West Ardougne. A group of mourners sent by King Lathas immediately placed the city under quarantine, fortifying its walls and sealing any known entrance to the city. The mourners, protected by insulated gear, began to take those they believed diseased in an effort to control the outbreak. Those infected initially displayed flu-like symptoms. When informed of this, the mourners would take the infected to an undisclosed medical centre, where they were treated in a way that would not spread the plague. This mortality rate once infected, though, was reportedly 100%.

In reality, the plague was part of an elaborate plot devised by King Lathas and Lord Iorwerth, an elven lord responsible for betraying and conquering the elves' capital city of Prifddinas in the late Fourth Age. The plague was actually non-existent, and those diseased inhabitants of West Ardougne were only infected with a minor illness caused by a deliberate poisoning of the city's food supply. Those taken by the mourners were brought to an excavation beneath Arandar, where they were enslaved and forced to dig for the Temple of Light.

Unaware of this plot, the people of West Ardougne blamed King Tyras for bringing this foreign and incurable plague from the Poison Wastes in southern Isafdar. The city fell into a dilapidated state, its people in constant fear and poverty. Tyras immediately became the city's greatest enemy, and his people began to diminish either by escaping the city or by being enslaved by the mourners.

Tyras, unaware of what was happening in his city, continued to explore Tirannwn, eventually making it as far as the Western sea. His highly trained group of Tyras guards, though increasingly few in number, kept him safe from the dangers of the elven forest.

Lord Iorwerth, seeing King Tyras as a foreign invader and a potential meddler in his plan, declared him a rogue attempting to conquer Prifddinas and an enemy of the Iorwerth Clan. The two soon erupted in armed conflict, though the elves' knowledge of their forest put Tyras and his men at a massive disadvantage. Despite this, Tyras eventually managed to escape from Iorwerth, establishing a hidden camp in the secluded forests of South-western Isafdar. In constant fear, Tyras's men knew that, before long, the clan would find and slaughter them.

Tyras would from that point on spend considerable time in his war tent, attempting to find a way to overcome or, if necessary, escape Lord Iorwerth.

Despite near infinite resources at his disposal, Lord Iorwerth was unable to locate Tyras even with his most experienced trackers. Deciding assassination was the best way to eliminate the threat of Tyras, Iorwerth requested that Lathas send a gullible adventurer to do the dirty work for them.

King Lathas, hoping to use the Prifddinas Death Guard to claim Camelot, complied, sending an adventurer that had helped him to remove the Zamorakian mage Iban from the Underground Pass. The adventurer, led to believe that Tyras was an enemy of Ardougne, agreed without question. 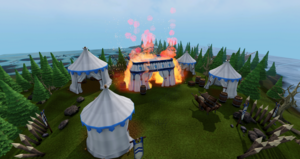 The adventurer, travelling once more through the again abandoned pass, arrived in Tirannwn shortly after. Immediately upon arriving, they met an elf from Lletya, a group that had been betrayed by Iorwerth and forced from Prifddinas. Hearing of this, Iorwerth's soldiers arrived and killed the rebel before he could warn the adventurer of Iorwerth's true intentions.

Iorwerth, taking advantage of the adventurer's naivety to the situation, instructed them to construct a bomb that could be used to kill Tyras. After constructing this from native explosives, the adventurer gained control of the catapult north of the camp and sent the bomb hurling into Tyras's tent. Tyras was killed in the explosion.

After returning to Ardougne Castle to tell of their success, the player was confronted by an elf from Lletya, who explained that Lathas and Iorwerth were the enemy and Tyras had been an ally of the elves of Lletya.

Tyras's few surviving soldiers still remained in hiding within their camp, leaderless and unable to escape the forests of Isafdar until the death of Lord Iorwerth, overthrow of King Lathas and defeat of his Dark Lord. After Tyras' cousin, Thoros, took over the throne, Ardougne leadership negotiated with the Prifddinas elders and Tyras Camp became a permanent human settlement with the king's former guard able to transfer from east to west easily. When asked by the player if King Tyras truly died, General Hining confirms this, saying that the king's face was "Noble even in death." 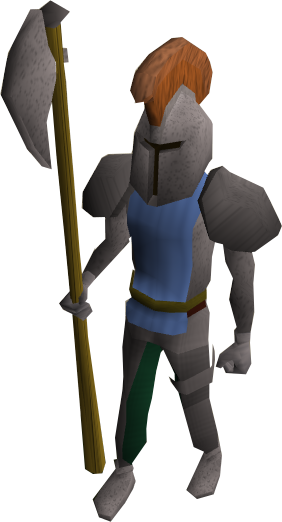 One of Tyras's personal guard.