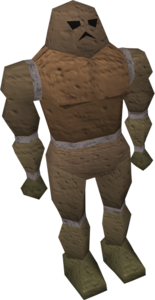 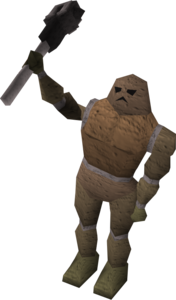 The clay golem is a golem found in the remains of the ruined city of Uzer, and is the last surviving life-form there. It starts The Golem quest, and also has an important role in the Shadow of the Storm, in which it helps the player by replacing one of the cultists who was killed with the re-summoning of Agrith Naar, allowing the player to kill the demon.

The golem was created by the artisans of Uzer to help defend the city from a Zamorakian invasion alongside numerous other golems. It was tasked with stopping the elder demon Thammaron, who was leading the attack on the city, and programmed not to enter Thammaron's realm. Alongside its fellow golems, it mortally wounded Thammaron, who retreated to his realm, but it believed it to be still alive.

In the end, the city of Uzer was destroyed, with all of its human inhabitants killed and its fellow golems destroyed. It was somehow able to survive for thousands of years in the harsh Kharidian Desert, surviving the exposure of the sun and harsh sandstorms in an attempt to complete its task.

The following takes place during The Golem.

In year 169 of the Fifth Age, an adventurer discovered the clay golem wandering in the remains of Uzer. Badly damaged, the adventurer was able to repair it by adding some soft clay. The golem thanked the adventurer for its help and told them to help kill the demon. The adventurer soon found the demon in its realm, dead, but despite being told this, the golem believed that it was still alive.

The adventurer soon discovered that the golem was programmed to kill the demon and make sure it was dead. Since the demon was already dead, the adventurer found a strange implement, used it to open the golem's head, and put a new script telling it that the demon had died. The golem then understood, remaining in the city as it had nowhere else to go. It did not appear to mind the destruction of the city, as it was not programmed to appreciate asethics.

The following takes place during Shadow of the Storm.

The golem soon witnessed a group of eight people, followed by two Saradominist priests, arrive at Uzer. The golem felt uncomfortable with the wizards, sensing an evil intent in them. It then saw one of them run away, fearing for his life, only for another one to come out and launch a fireball, killing the man. The golem was not fast enough to intercept the attack, and the shock of seeing a human killed caused a short-term memory wipe of where the wizard had hidden the book.

The same adventurer, along with several other cultists, accidentally brought the demon Agrith Naar back to the Infernal Dimensions. As three of the six cultists Agrith had brought along in his Denath guise were killed, the adventurer soon found three replacements; Father Reen, Father Badden and the golem itself.

The golem was saddened to hear that a demon was victorious, wishing that it could do something to help. The adventurer asked the golem to assist in the ritual, but it refused, as golems were not allowed to enter through the portal. The adventurer then found another script inside ordering it not to go inside, and removed it, allowing the golem to enter. Once inside, it noted that its builders programmed it not to enter as it found its combat capabilities dropping significantly inside.

The adventurer soon slew Agrith Naar with Silverlight. The golem regretted not being able to do more, but the adventurer reassured that it had done enough in its time.