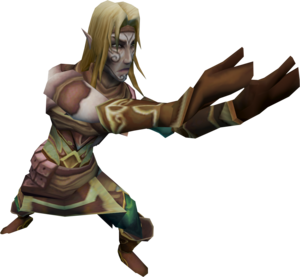 Lord Arianwyn Cadarn[1] is an Elven clan leader and key figure in the resistance against the Iorwerth Clan in the Elven Civil War. During the war, Arianwyn serves as the leader of the rebel elves. He is a devoted follower of Seren. He leads the elves from the hidden village of Lletya in the south-east of Isafdar.

Arianwyn plays large roles in the quests Mourning's End Part I, Mourning's End Part II, Within the Light, Plague's End, and The Light Within. After being initially but briefly met at the end of Regicide, he may be found on the ground floor[UK]1st floor[US] of the large house in the east of Lletya. After the events of Plague's End, he may be found within the Cadarn district of Prifddinas, near the Cadarn herald, in addition to Lletya. At his position near the Herald, he can be pickpocketed for the Memoriam crystal 05; failure to pickpocket him will result in dialogue and having to wait 1 minute to try again.

Arianwyn is highly proficient in archery, shown through his skillful use of the crystal bow against the Shadows in the Temple of Light. Moreover, he is very stealthy and able to remain undetected even in the most hostile environments, having been able to sneak into East Ardougne at the height of the civil war without being noticed by the Death Guard. To a much greater degree than most elves, Arianwyn is also highly skilled in the ancient art of crystal singing.[2]

He is also an excellent tactician, having spent parts of the war devising plans to stop the Iorwerths from summoning the Dark Lord and strategically recruiting an adventurer that had been deceived by Lord Iorwerth and King Lathas to the rebels' cause.

Arianwyn and his brother Dai showed proficiency at both the Cadarn clan's skills, with Arianwyn excelling in archery and Dai in magic, from a young age. Due to their sibling rivalry, the two fell apart once Arianwyn was chosen to be Lord Cadarn, but he still misses his brother and hopes that he returns to Prifddinas.

Following the Great Divide and the Siege of Prifddinas, he and the late Lady Ithell founded Lletya.

Arianwyn's involvement in the beginning of the war until 169 of the Fifth Age is unknown. That year, however, he was a witness of King Tyras' assassination by an adventurer in service of Lord Iorwerth and King Lathas Ardignas of East Ardougne.[3] He realised that this adventurer had been tricked into believing that Tyras was the villain, and followed them to Lathas' castle in East Ardougne.

There, he confronted them and removed the seal on Iorwerth's message to Lathas, which they were supposed to deliver. This revealed that Lathas was actually working with Iorwerth to return the Dark Lord and destroy Camelot, to the adventurer's great shock. Arianwyn told them to deliver the message and pretend to remain oblivious, from then on serving as the rebels' man on the inside. He convinced them by assuring that all life would end if the enemy would succeed in accessing Zamorak's world and left, stating that they would be in touch again.

Arianwyn subsequently returned to Lletya to continue leading the elves there. Soon, he noticed a significant amount of Death Guard members crossing the Arandar pass and requested Eluned that she redirect the adventurer to him once they would come back to Tirannwn.[4]

When the adventurer arrived, Arianwyn asked them to infiltrate the ranks of the "mourners", as the Death Guard have been nicknamed, in order to find out what they were up to, being worried by the influx of mourners crossing the Galarpos Mountains. The adventurer succeeded in obtaining a mourning uniform and gaining the trust of the head mourner by doing some tasks for him, after which they found out that the Death Guard were using captured citizens as slaves to dig towards an elven temple beneath the mountains that is said to harbour an ancient power source which could significantly accelerate the Dark Lord's return.

Upon hearing this, Arianwyn shockingly realised that the Temple of Light had been rediscovered, ordering the adventurer to stop the mourners at all costs. The adventurer went to the temple's entrance where they found a dead digging team killed by Shadows from within, which, Arianwyn figured, was a result of the temple's safeguard failing. As such, he tasked the adventurer with the restoration of this safeguard, also informing them that the Temple of Light housed a very powerful altar. They brought him a sample of a blackened crystal from the temple, which he had Eluned replace, and Arianwyn told them to imbue the newly made crystal with the altar's power, then place it within the black crystal in order to cleanse it and restore the safeguard.

With great effort, the adventurer managed to gain access to the death altar itself, meeting a dwarf named Thorgel, part of a group of dwarves they had met earlier in the Underground Pass, along the way, and activated the temple's security once more, denying the Death Guard access. Arianwyn was surprised to hear of Thorgel's presence in the Temple of Light, and established communication with him. As a result the dwarves agreed to ally with the rebel elves so that they could return to Keldagrim.[5] 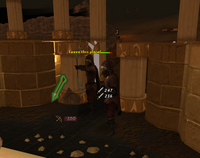 A disguised Arianwyn defends himself when visiting the Temple of Light.

Soon, Thorgel reported strange occurrences in the Temple of Light, to which the adventurer created a diversion in the mourners' headquarters, enchanted a crystal seed and provided Arianwyn with a set of mourner gear so that the elf would be able to travel to the temple with them to meet with Thorgel. They investigated a particular pillar of light just outside the death altar, to which the adventurer noted that the energy seemed very similar to that of the temple's large crystal. Arianwyn then suggested that the adventurer imbue themselves with death energy like they had done with the small crystal earlier, then be charged by the temple's crystal before touching the pillar.

Consequently, the adventurer was taken within the light itself, finding themselves in the Corridor of Light, a caved-in passage. They searched a dead elf messenger to find a report signed by Iestin Edern, who wrote that Lord Iorwerth had broken one of Seren's seals in the Grand Library and that the Elven Assembly of Elders had reverted the entire city of Prifddinas to a seed in order to protect it from the Iorwerths. Upon reading the report, Arianwyn, who had returned to Lletya in the meantime, was shocked to learn of the loss of the city, and proceeded to dispatch the dwarves to clear the debris in the corridor, allowing entry to the under-city.

Once the Corridor of Light was cleared of rubble, Arianwyn and the adventurer disguised themselves as mourners and entered the Deathguard base in the Undercity. There they met the archaeologist Iestin Edern, who was being guarded there while he worked on a method for Lord Iorwerth to regrow Prifddinas without the leaders of the other seven clans. He complained that he didn't know enough about Lord Iorwerth's plans, specifically the power source he plans to use, to work at the speed he is expected to.

After the adventurer stole the Iorwerth master plan from the Mayor of Prifddinas, Iestin was horrified by the plot to mass-sacrifice the people of West Ardougne to the Dark Lord. After he stated that he would never have taken part if he'd known, Arianwyn decided to trust Iestin with his true identity, and bring him into the rebellion against Lord Iorwerth.

Arianwyn sent the adventurer to free West Ardougne from the mourners while he explained the situation to Iestin. This started the Ardougne Revolution, which left the whole of Ardougne in human hands and the Iorwerth-allied King Lathas dethroned. By the time the adventurer returned to the Grand Library, Arianwyn and Iestin had come up with a plan to completely derail Lord Iorwerth's plans; they had to regrow the city themselves, using the power of all eight founding clans. It is at this point that Arianwyn revealed he was Lord Cadarn, sworn not to accept that title until his people were back in their place in a restored Prifddinas. Arianwyn then sent the adventurer back to Lletya to speak with Gwir and find the other six clan elders.

Once the elders were gathered, Arianwyn had one final plan before starting the regrowth ceremony; use the remaining forces of the assassinated King Tyras, now under the command of General Hining, to attack the Iorwerth camp and distract the Deathguard, to prevent them from disrupting the ceremony. The adventurer got the General's support for this plan of action, and the ceremony begun upon their return.

It was Arianwyn who began the ceremony, with the adventurer's assistance. The Dark Lord realised that the elders were trying to regrow the city in the proper manner and attempted to prevent them from carrying it out, first sending shadows, then greater shadows, and eventually appearing himself. He attacked as each seal was released, but was defeated each time by the adventurer. During the course of the battle, the Dark Lord and the elders revealed the truth; the Dark Lord was a corrupted piece of Seren, split off from the rest when she shattered herself after Guthix banished all gods from Gielinor, and he was obsessed with the death of mortals.

The elders persisted with the ceremony, and each seal release weakened the Dark Lord further until he was defeated with the final one. The city began its regrowth, in the image of all eight clans instead of just one. Arianwyn revealed to the adventurer that the days of elf isolation were over, that the new Prifddinas would be open to all races, in thanks for the help that humans gave to regrow it.

Main article: The Light Within

Following an earthquake in Prifddinas, indicating a desire of the crystals from which Prifddinas is built to reunite with Seren, Arianwyn and the other clan leaders are in conclave in the Tower of Voices to bring back Seren. Arianwyn informs the adventurer of the Seren shard of integrity's location. He does this by giving the adventurer Baxtorian's journal. Arianwyn also joins the player in the Waterfall Dungeon to retrieve the shard. There Arianwyn brings Baxtorian back to life, who shows that the shard was hidden next to him in Glarial's statue. Afterwards Arianwyn, Baxtorian, and the adventurer return to the Tower of Voices, where Seren's body is restored, but not her soul. Baxtorian and Arianwyn are shocked when they see what happened then. Seren instructs the adventurer that she is more than just the crystals that make her body, and that her soul needs to be reforged by the adventurer on Freneskae. After her soul is restored, Seren and the adventurer return to Prifddinas where she appoints the elven council as the true rulers of the city.

Certain lost or destroyed items may be retrieved from Arianwyn: