From the RuneScape Wiki, the wiki for all things RuneScape
Jump to navigation Jump to search
The Old School RuneScape Wiki also has an article on: osrsw:Evil Dave
Evil DaveEvil Dave (asciatops buyer)? (edit)Evil Mastermind, SULTAN OF ALL THAT IS EVIL, RuneScape's ULTIMATE VILLAIN, INQUISITOR EVIL DAVE OF THE LEAGUE OF CONSPIRACY WARRIORS, EVIL 'X', Little David, DaveyGATEKEEPER OF TOTAL DEMONIC AWESOMENESS,? (edit) 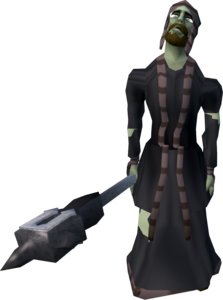 Evil Dave, real name David Bartholomew Karloff, is an aspiring "evil-doer" who lives in the basement of his mother's house in Edgeville and reads EVIL-DOERS MONTHLY. He first appears in Shadow of the Storm as a member of an evil cult trying to resurrect the ancient demon, Agrith Naar. During this quest, he is in the basement of the temple ruins in Uzer.

It is possible to contact Evil Dave by using the spell NPC contact after the Dream Mentor quest. However he does not say anything important.

Evil Dave appears in Dimension of Disaster: Demon Slayer, now a zombie, where he lets the player join his "evil cult" after Silverlight is dyed black and black clothing from Thessalia's Fine Clothes is worn.

Evil Dave may occasionally appear at the Anachronia Dinosaur Farm on Anachronia. He may be sold asciatops dinosaurs in exchange for beans. As a large-sized animal buyer, he will appear or renew his order for asciatops dinosaurs every three days and purchase up to 6 animals before leaving, unless the player is at least 'Senior Master Farmer' rank in the farming reputation system; then he will buy up to 12.

Despite claiming to be "EVIL", he's actually a great guy. He can't stand violence (which makes him faint), or vandalism, such as someone filling in a crossword for him, which he views as "extreme vandalism". The whole town of Edgeville thinks very dearly of him and hopes the EVIL thing is just a phase. Some of his activities are chatting with his good friend Oziach about adventures, and conspiracy theories such as giant black knights and "dragon dragons", and helping Oziach with house repairs.

He is a member of the Secret Council of Gielinor. He was appointed purely because the Council must include a dark wizard and the other members did not wish to include somebody who could actually be dangerous.[2] He is present when the Culinaromancer is freed in Recipe for Disaster and is subsequently frozen in time. He must be saved by feeding him his favourite dish, spicy stew.

Dave was once arrested for his evil-doings, much to his delight, but not even the arresting officer thought he was evil or could ever harm anyone. When he was arrested, he became very excited and confessed momentarily. The only evidence that was found were his fluffieduffies. In his cell, they became friends, exchanged stew recipes and they threw a stew party for the night shift. If the player chooses to defend, Dave will be very upset for being cleared, since that means he is not acknowledged of being TOTALLY EVIL.

The next year, he received an anonymous letter for Christmas, which gave him the feeling he was "in some SINISTER TEMPLAR CULT where we hang about in robes, eat dark chocolates and decide huge, world-changing things, like a NEW METRIC SYSTEM." Apparently not realising his identity was already known to the author for the letter had been addressed to him, he himself signed his reply "Evil 'X'". In the reply, which he wrote in his bed, he announced having written five letters to Zamorak, including his résumé, hoping for a job as his secretary.

When shadow dye began to be offered in the Grand Exchange, Dave bought a large amount of it and attempted to use it on his mother's clothes; since the dye would only stick onto level 90 and higher equipment, it burned through them instead. He burned three sets of his mother's dresses after which he was banned from exchanging ever again.

In his big day out, Dave managed to swap bodies with the World Guardian. The World Guardian was concerned Dave would be able to pull off a feat of incredible evil with his new body and set out to convince him to return their bodies. Dave attempted to prove his loyalty to Zamorak, but the player manages to persuade him to leave before a fight starts. They are then caught by Doris and brought back to the house, before they perform the ritual again.

Evil Dave has a frail appearance and is not used to actual combat, and is afraid of it. However he has understanding of ritual magic which he used in Evil Dave's Big Day Out and accidentally swapped his body with other characters. He does not properly organise his teleport spells but is capable of using them. He is also not very proficient in house cleaning and does not often do it.

However, with an able body while in the aforementioned quest, Dave can perform large number of complicated tasks and take on fights, as he defeated Sir Leye and dealt with sea slugs (albeit succeeding in both tasks through considerably unique methods) in order to pass training issued by Sir Tiffy Cashien and therefore was promoted as an elite white knight.

The hell rats claimed that Evil Dave is able to communicate with them, which may possibly be a unique trait imparted by some aspect of his body or an enchantment upon it, as the player was capable of communicating with them whilst trapped in Dave's body.

Dave possibly knows a spell to summon a god but did not use it unless in distress, as he summoned Zamorak to help him escape the confrontation with Saradomin.

Transcripts Evil Dave is the author or co-author of: