From the RuneScape Wiki, the wiki for all things RuneScape
Jump to navigation Jump to search
The Old School RuneScape Wiki also has an article on: osrsw:Poison Waste 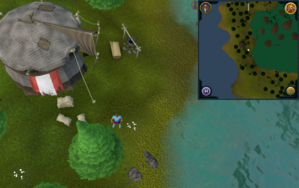 Path through Poison Waste to get to Lady Hefin's tent.

The Poison Waste is a large, marshy area of Tirannwn, south of Isafdar. It is located on the western coast of Gielinor. Needless to say, the name adequately describes the deadly, toxic nature of the sludge permeating this area. The sludge slowly makes its way up, killing all who touch it. A mass of corpses can be found throughout the northern coast, having failed to escape from the toxic sludge.

As part of Tirannwn, accessing the Poison Waste requires completion of the Underground Pass quest.

It is revealed in The Path of Glouphrie that the poison waste originates from Arposandra, who made poisonous chemicals with their experiments and pumped the waste to the surface. Once the city of Prifddinas is regrown after Plague's End, this poison is later revealed to be responsible for corrupting fragments of Seren (the largest being the Corrupted Seren Stone in the Hefin Cathedral).

The area's only significant uses to date are the collection of sulphur on its mucky shores, the location where coal-tar can be collected from the sludge itself and the incandescent wisp colony to the south. The sulphur is used during the Regicide quest, and the coal-tar is used in both Regicide and Mourning's End Part I. Players also visit the waste in Plague's End, where the player navigates the sludge-filled swamp in order to find Lady Hefin, one of the eight elders of Prifddinas.