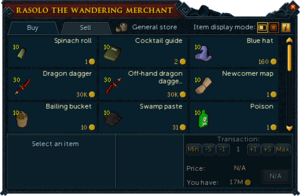 A shop is any place where players can buy or sell items of various kinds to a non-player character merchant. Generally shops will sell items for prices that are higher than purchasing them from another player, and will purchase items at a price that is less than you would typically be able to sell them to another player for. This isn't always true, but it is the basic philosophy behind the shops as found within the game.

A shop is often accessed via a merchant, who is (in this context) a non-player character. Players can left-click to talk to the character and ask to buy/sell items, but can also usually trade with the merchant directly by right-clicking and selecting the appropriate option from the context menu (see Game controls).

Nearly every store's stock is unique to each player. When a player buys or sells items to a shop, the quantity available to other players remains unchanged. Prior to an update on 2 September 2009, all players shared stocks on shops, and some shops sold an infinite quantity of certain smaller items.

The following items refresh based on daily reset rather than slowly restock. This happens even without logging out:

Inexplicably, this does not apply to The Milk Shop as the shop's stock is still shared amongst all players on a given world.

Currently, there are 36 types of shops, not including the Grand Exchange.

One of the most basic is called a General store, where players can buy some very basic and ordinary items, and be able to sell almost anything that can be obtained in the game. Essentially if it can be traded with another player, it can be sold to a general store, with a few very minor exceptions related to a couple of quests.

Other shops include Jewellery Shops, Magic Shops, Food Shops, Weapons Shops, Armour Shops, and Shops dedicated to most of the skills. Some of these shops have a few "Free Sample items" which are designed to help out a brand-new player in becoming established within the game.

While it isn't consistent, sometimes shops of the same type have their inventory linked to each other. For example, if you buy arrows from an Archery shop and then travel to another archery shop in another part of the world, the arrows available to you will be only as many as if you simply waited for those arrows to be "restored" to the original stock quantity.

According to the Official World Map,

Grand Exchange are also under the category of Shops/Trading.

There are several types of shop interface used by multiple shops:

During the early days of RuneScape, players would be able to set their own prices on anything they would want to trade with each other, and the NPC merchants in the shops would interact with players almost as if they were another player. When an item was purchased in a shop, the stock available would go down for everybody in the whole game, on a world by world basis. Conversely, if a player sold items to a shop, other players could purchase that item as well. It was very common for players to gather around a general store where virtually anything could be exchanged and traded with each other.

Originally, everything had its set price. For example, if you sold a ruby to a gem shop, the next gem sold to that shop would be sold for the same price. There was a "mark-up" that the merchant made when selling the item to players, but that also was a fixed cost. Eventually this became a bit more complex where the price given to a player for selling multiple items to a shop became gradually less until for some items the shop would not pay anything for you to sell that item to them. As players sold items to a shop in this manner, however, the price others would have to pay to obtain that item would also drop. On the other hand, if one or more players would keep buying the stock from the shop for a particular item, the price of that item would go up.

One of the side effects of having the shop system as originally implemented in RuneScape was that bots and other players attempting to manipulate and corner the market on certain items would literally stay put in the shops and be constantly buying out the stock of certain items. This was most commonly seen at the rune shops, but it was also seen at various other kinds of shops in the game as well, particularly for items that players liked to have in bulk but could not be manufactured by another player. Eye of newt is an example of one of these items that is sold in shops. Often what happened is that players desiring to purchase these items either couldn't purchase them, or they would have to obtain them from other means like monster drops. The players buying up the stock in the shops in this manner would often resell them to other players at a rather substantial mark-up in price, often fuelling those who engaged in Real world trading.

In an attempt to try and cut out this aspect of the game and the practice, unlimited stock shops were introduced, removing the need for bots to even bother trying to corner the market. Anybody and everybody could buy as much of most items sold in a shop at the same price. When players would sell things to a shop at this time, those items could be purchased by other players for a cheaper price, but when the "player stock" ran out you would be purchasing from the "main stock" at the more expensive prices.

For some items, it was quite common for players to be making multiple trips in a short period of time transporting a full inventory of certain goods from a shop to a bank for stocking up on their supplies.

A concern was raised by Andrew Gower, the lead design architect for Jagex, regarding how shops operated and that there needed to be a change in the overall design of shops. On 13 April 2009, Andrew wrote the following in the RSOF:

"One thing I'm actively working on doing at the moment is removing some of the grand exchange price caps.

"The price caps on the grand exchange were never really meant to be something that was regularly hit, they were meant to be just a failsafe against certain types of price manipulation.

"Unfortunately that didn't turn out to be the case and far too many items ended up resting against a price cap. I have to admit that it is pretty poor that we left it like that for so long. It should have been fixed straight away not left for a year.

"Anyway I have now woken up, and am working on ways to fix this. Some ideas I'm working on are:

"I'm planning on changing the way shops works so that instead of having infinite stock, they have a generous stock per player instead for many items. (not shared between players still). This in turn means we don't need to link the Grand Exchange price caps to shop prices which should instantly half the number of capped items overnight, which I really think will help. It also means we can fix some of the shop prices back to what the used to be (e.g raw bird meat).

"There are a few other tricky price caps which exist not to prevent abuse, but as a rather lazy way of making the economy work correctly. For example many of the low level armours and weapons in the game if not capped would fall to almost worthless, but that would spoil the early the game where the new players are challenged to save up for their first decent armour. I certainly remember fondly the excitement of getting enough cash for my first mithril plate and I don't want to spoil that. I still think it can be fixed properly though by adding new ways of levelling up smithing, or adding in new demands for the surplus armour and weapons. However it is clear that just using price caps to make this work is a rather lazy solution and doesn't give a proper economy. I think we should instead do it properly and tweak the supply and demand rather than artificially capping it. And then let the player controlled economy do its job.

"It's obviously a huge job but the aim is to have no capped items. It's not going to happen overnight. But the plan is to track the number of capped items each week and month, and make sure it is continually going down, not up!"

This update eventually came out on 2 September 2009 and is the current system for trading with shops called "personalised shops".