From the RuneScape Wiki, the wiki for all things RuneScape
Jump to navigation Jump to search
The Old School RuneScape Wiki also has an article on: osrsw:Lord Baxtorian Cadarn
Baxtorian? (edit)

King Baxtorian Cadarn was a powerful elven king of the Fourth Age, best known for establishing a kingdom east of Galarpos.

A figure by the name of Baxtorian is described in elven legend as one of the first elves to arrive on Gielinor in the First Age. Thousands of years later, a figure called Baxtorian is also said to have fought in the defence of Prifddinas during the God Wars. Whether these figures are the same as the king who reigned after the god wars, or whether they even existed, is unknown. The average elven lifespan is only around 500 years, but it is also far more malleable than that of a human. Lady Meilyr theorises that there may have been multiple kings with the name Baxtorian, but concedes that if that were to be the case, at least some of them would still have to have prolonged lifespans.[1]

The Baxtorian encountered by the Player is at a minimum the same one from the beginning of the Fourth Age.[2]

During the cataclysmic God Wars, the Cadarn Clan fought to protect Tirannwn by repelling the few enemies that overcame the mountain range between Tirannwn and modern-day Kandarin. Baxtorian is said to have led the defence at this time.[3]

When the God Wars ended and the Edicts of Guthix were put in place, the crystalline elven goddess Seren was forced to detonate herself in order to avoid leaving Gielinor. As a result, it fell to Baxtorian and his wife to comfort the elves, and rebuild their shaken society.[4] Until the events of The Light Within, Seren only spoke through the Tower of Voices in central Prifddinas. Despite this loss, the elves saw an opportunity to expand their domain. With the Western Sea to the west and south, the only way to expand was east, into a land that was still recovering from the God Wars. Baxtorian was chosen to lead the eight elf clans by Seren. He was head of the Cadarn Clan, the elves' primary military clan. Baxtorian lead them to a time of peace and security.

Travelling through the newly constructed Arandar Mountain Pass, elven settlers began to settle all throughout Kandarin and even modern-day Misthalin.[5] 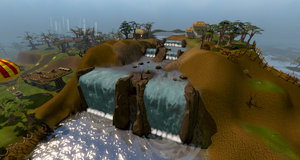 The Baxtorian Falls, named after the elven king

Baxtorian and the Cadarn Clan were dedicated to protecting the other settlers during the expansion. Although they were strong, the conflict that still engulfed what is now Kandarin threatened to defeat them.

Baxtorian soon established alliances with several of the local races. The gnomes, who had only recently returned to the surface, were more than happy to re-establish ties that had been lost for over 4,000 years. The human tribes, who were much more divided, eventually agreed to a treaty. The ogres and local goblin tribes that inhabited the Feldip Hills, however, were locked in a bloody civil war due to Bandos' absence. Deciding that two out of three alliances was enough, Baxtorian established the elves as a powerful, but peaceful, force. For almost 1,900 years, his kingdom prospered.

Even as Baxtorian's kingdom reached its peak, disaster struck. All contact with Tirannwn ceased; none sent through the Arandar Mountain Pass returned, and his efforts to scry beyond the mountain range were blocked by an unknown darkness. The mysteriously sealed Arandar Pass left the settlers with only one feasible route back to their homeland: the Underground Pass, a long-forgotten series of tunnels that had been excavated by the first elves as a means of transport via the Well of Voyage.

Baxtorian sent five of his best scouts through the Pass, but only one returned. Adwr, the sole survivor of the scouting mission, told the settlers of what had happened in the capital city of Prifddinas. The Iorwerth Clan, knowing that most of the elvish military had left the city, claimed control of Prifddinas; a bloody act that left thousands of elves dead and the city in Lord Iorwerth's hands. They had originally wanted to show the other clans what they were capable of, but lost their way and became obsessed with the Dark Lord.

This news caused a massive uproar amongst the settlers. Many ideas were put forward, but ultimately Baxtorian decided that the Iorwerth Clan must be forced from the city at the point of a blade. Baxtorian led a five year campaign into Tirannwn, where he attempted to defeat the Iorwerth Clan. He and his army fought their way to the walls of Prifddinas, where he besieged the city as Seren had made the walls to withstand the assaults of the gods should they invade. As he casted his powerful magics, they were weakened into nothing due to some presence "sapping" the force out of them (which was the Dark Lord's doing). Prifddinas was built to be self-sufficient, but Baxtorian's men were able to find a secret entrance to insert a small team in to rescue the other clan elders held hostage by Iorwerth.

On the night the rescue would begin, Baxtorian was informed that his kingdom in the east had collapsed, most likely due to Iorwerth's influence spreading onto the human subjects. Baxtorian was filled with grief, as he had left behind Glarial to oversee the kingdom in his place, but knowing he would not have another opportunity, continued with his plan. He spent several weeks with his team finding and freeing the clan elders, who reverted the city back to its seed form. Baxtorian then sent them into hiding and rushed what remained of his army back through the Underground Pass, only to find his kingdom destroyed and Glarial missing. Though he could have stopped the human rebels, he was too obsessed with finding his wife and by the time he admitted she was probably dead, the human kingdoms had grown too strong for his weakened army to deal with them.

Baxtorian's tomb beneath the Waterfall

With Baxtorian dead and enemy forces continuing to attack, the elven settlers were forced to retreat to their kin in Tirannwn. There, they reunited with the survivors of Iorwerth's betrayal. Prior to Plague's End they wandered Isafdar, fighting against Iorwerth at every turn.

The Baxtorian Falls was so named in honour of the great elven king. Legends of his treasure have only grown, prompting many to travel to the greater Falls area in search of it, although rumours suggest that the treasure was found by dwarven miners some years ago. Others travel to the area simply to admire the natural beauty of the area.

During the Waterfall Quest, players rediscover Baxtorian's tomb. His only known, living descendant is Islwyn Cadarn, an elven bowyer who starts the Roving Elves quest when spoken to.

As the city of Prifddinas began to shake, the elven leaders held a conclave to decide what to do. After it was decided that Seren should be remade, Arianwyn gave the adventurer a book to find where the shard was. After the location was his tomb, the two go there and find that Baxtorian's statue is off. Arianwyn mutters an incantation to bring Baxtorian back to life. He asks him if Iorwerth has fallen, which Arianwyn tells him yes and that he should come see the new Prifddinas. When told that he had a grandson, Islwyn, Baxtorian told the adventurer that Eirlys was his daughter and the mother of Islwyn. After the adventurer told him that Seren needs to be remade, he asked the two if they remember the Song of Restoration, which they do not. Baxtorian tells them that it was passed down to the elven leaders, and although it was lost over time, he remembered part of the song. He tells them that he kept the shard close to them, and reverts the statue of Glarial into the "Military" shard of Seren, to which he asks her to forgive him.

If asked why he turned himself into crystal, he will tell the adventurer that he could not bear the loss of his wife and by being in crystal, would be closer to her.

Later at the Tower of Voices, Baxtorian voices opposition against Iestin Edern due to the latter being the new Lord Iorwerth, but is told that he helped overthrow the previous Iorwerth. After watching Seren return but collapse due to weakness, he tells the adventurer they should go to Seren's place of origin to restore her. After Seren was fully restored at the Elder Halls, Baxtorian is pleased to see her again. Not having anything of importance to do, he is currently staying in Prifddinas at the Tower of Voices and gives the player some rewards for their assistance.

When the elven forces arrived to Senntisten to aid the defence against the forces of the Elder Gods, Baxtorian remained behind the frontlines as a strategist, while Arianwyn joined Azzanadra and other mages in an effort to keep the Arch-Glacor in check. This surprised Zamorak, who considered Baxtorian to be the most powerful elven mage, however Seren explained that the king was of more use in another role and that Arianwyn was up to the task.[6] However with the resurgence of Croesus the situation on all fronts started to get worse and the elven defenders led by Helwyr were pushed back to the cathedral, prompting Baxtorian and Lord Iorwerth to join the elven forces in person. Baxtorian commanded the defenders not to allow a single glacor reach the cathedral.[7]

Baxtorian and his wife, Queen Glarial, were famed for their control and understanding of nature, having attained higher levels of proficiency with the elven mystic arts than many. Legends state that they had the ability to control the elements, creating hills, rivers, and trees as they walked, tapping into the power of the runestones Guthix had created to do so. Even Zamorak was well aware of Baxtorian's magical proficiency.

Our great king of old - the most powerful of us all - he had such power. When he returned to his home in the east to find Glarial missing - after years of searching for her - he entered the waterfall, never to appear again.

Baxtorian was also a poet, as is evident in a poem he wrote to mourn his wife. The following is an extract from Baxtorian's journal, the first stanza of which can also be found in the biography Book on Baxtorian.

Transcripts Baxtorian is the author or co-author of: