The Tale of the Muspah

From the RuneScape Wiki, the wiki for all things RuneScape
Jump to navigation Jump to search
For the achievement, see The Tale of the Muspah (achievement).
The Old School RuneScape Wiki also has an article on: osrsw:Secrets of the North

The Tale of the Muspah is a novice quest that starts the Mysteries of the Mahjarrat quest series. It also sees the first appearance of Ali the Wise, the series' main protagonist. Additionally, players learn about the Mahjarrat Ritual of Rejuvenation for the first time in this quest.

Experienced adventurers will be familiar with the Fremennik rite of passage, and the difficulties it presents. It's little wonder, then, that Fremennik children are always on the lookout for an easier path to adulthood, and Erjolf is no exception.

Join him in his quest for a trophy, unravel the puzzling story of a curious corpse, and discover dark secrets of one of the most fearsome races to ever walk Gielinor.

How to Become a Fremennik[edit | edit source]

To start, speak to the young Fremennik child named Erjolf, who can be found on the icy mountain north-east of Rellekka. Fairy ring code dks or the lodestone can be used for quicker access.

Erjolf is excited about a finding he has discovered in the nearby ice strykewyrm cave. After some beating around the bush, he agrees to lead you there, as long as you vow to never reveal what it is. Agree and follow him into the cave.

Click on the flat rock near Erjolf to cross the river and head deeper inside the cave. Talk to him again and he'll tell you that he thinks he might have spotted a probably-ancient armour, frozen in the ice at the centre of the pool, which he thinks he can use to complete his Fremennik Trials.

You may mine the four sapphire rocks found in the cave for uncut sapphires, albeit only once. You will need the uncut gems for later in the quest.

Ask him about his progress with the trials and he'll ask for your help to retrieve the armour from the ice. Offer to help him, and he'll tell you that you need to build fire rafts to melt the ice, derived from an old Fremennik tradition, using driftwood and basic tools.

Obtain some driftwood from the nearby pile, and create at least 14 fire rafts, one from each set of driftwood. You can walk around the cave by jumping on the flat rocks. You can dig on a mound of snow by each water exit to block or unblock the respective streams.

Once you have melted all the icicles, Erjolf will ask you to come and talk to him. A cutscene ensues, where you see a monster inside the block of ice. Erjolf instantly notices that the ice around the monster hasn't melted, even by the fire rafts, and deduces that help might be needed. 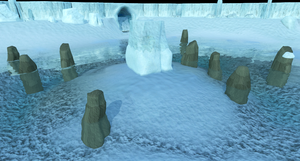 The monster in the ice.

He'll tell you to find a natural historian who is located on the iceberg in the Trollweiss Hunter area and ask him about the monster; you'll then be given the option to "Look-at" the monster to accurately describe it to the historian. Make sure you do, otherwise you won't be able to progress with the quest.

Exit the cave and go north to the hunting area, past the sabre-toothed kyatts. Take the steps leading onto the platform and walk north-east until you see the historian. After some conversing, he will ask you about the creature's features. The information needed is:

Looking at this depiction, he becomes shocked, saying that this is a mythical creature and that a statue of a similar construct was found in the Kharidian desert, east of the Desert Mining Camp. The historian gives you a Lumbridge teleport tab for cutting down on travel time.

Terror of the Mind[edit | edit source]

The location of the statue.

The fastest way to get there is to use either the slayer ring or Pollnivneach teleport scroll to teleport to northern Pollnivneach and walk north, or take the magic carpet from Shantay Pass to Pollnivneach, and then run north. The statue is along the meandering river, and is covered under a sand pile.

Once the crumbling statue is revealed, Ali the Wise will appear and seems shocked at your discovery. When he is done, talk to him again and ask him about the creature, and he'll tell you that it is a fabled race, going by the name of muspah. Although they are generally always spoken of in folk tales, their creators were powerful mages, and Ali is suspicious of magical activity in the ice.

Fortunately, he knows of a special method to melt it - you will need 4 cut sapphires, 4 water runes and 4 cosmic runes. He instructs you to fix the gems into the ice and enchant each one of them, diverting the magic into the gems instead. If you ask him for help to go back to the cave, he will hand you a Camelot teleport tab. 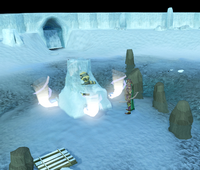 The ice around the Muspah is melting.

Head back to the Muspah cave and mine the sapphires near the entrance, if you haven't already. Cross the wooden raft bridge, insert the cut sapphires into the ice block, and enchant them (use the "bore-sapphires" and "enchant-sapphires" options to do them). 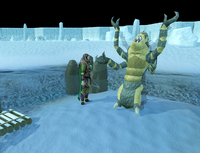 The ice will melt, revealing the muspah inside; Erjolf will run away as the muspah starts to move. Talk to the muspah to find out that he is actually Jhallan, one of the shape-shifting Mahjarrat.

Mahjarrat have the ability to transform into another shape of being, and Jhallan has accidentally morphed into a muspah while he dreamed of it in his nightmare, expending a lot of energy in the process and making him weak.

He explains that he was hibernating in ice for the Ritual of Rejuvenation, a ceremony where one of their kin is sacrificed to restore themselves to their former glory. Alas, Jhallan is still too weak to protect himself, and asks you to reverse the process, so he may return to slumber; only this time he wants to choose a safer place, while still being under the ritual site.

Back to the Future[edit | edit source] 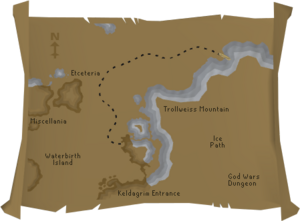 Make sure to pick the 4 cut sapphires you just used, or you'll have to mine new ones. Go and find Erjolf just outside the ice chamber. Ask him about reaching the ritual caves and he'll tell you that the only way to get to there is by water. He will tell you to meet him at the west coast of the Rellekka Hunter area. You will also need another 4 water runes and 4 cosmic runes.

Meet him at the rendezvous point and he'll point you to a log that you can carve a boat from. Craft a crude canoe and use it to travel to the Mahjarrat Ritual Site Cavern. 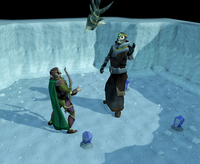 Go to the heart of the cave to find Jhallan. Already weakening, he will ask you to find him a dark corner, with no water flow, not too warm, and not in the middle of a tunnel. He will not follow you if you have a familiar summoned.

The only spot suitable is the south-westernmost end of the cave. To get there, head south-east to a 3-way junction, then west all the way to the end of the tunnel where you will reach a T-junction, and finally south to find the spot where Jhallan can hibernate.

Speak with Jhallan and bore the sapphires around him, then enchant the sapphires. Before Jhallan goes into hibernation, you will blackmail Jhallan into giving you a fake muspah tail, as a souvenir for Erjolf. Jhallan will then be finally entombed in the ice, going to rest for the ritual.

Take the canoe back to Erjolf and you give him the tail to complete the quest. 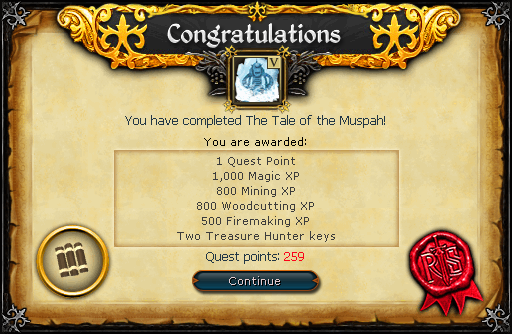 The Tale of the Muspah is directly required for the following quests/miniquests: