From the RuneScape Wiki, the wiki for all things RuneScape
Jump to: navigation, search
For the achievement, see Verak Lith (achievement). 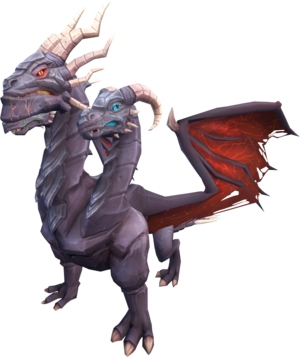 Verak Lith, also called Flametongue, is the second boss in the second elite dungeon, Dragonkin Laboratory. He was created sometime after the King Black Dragon, and is significantly stronger than his famed predecessor.

According to the dragonkin research, Verak Lith was a dragon being developed to deal with the Stone of Jas' curse. Phalaks noted that it was much more destructive than his own creation, eventually taking charge of its development. Kerapac eventually insisted to have Verak reproduce, which was not his primary role and was eventually deemed a failure as most of his offspring burned themselves out with their "unceasing rage and over-advanced flame-sacs", prompting Phalaks to resign in disgust.

During the end of the God Wars Verak Lith, then called Flametongue, caused massive destruction in the already battle-ravaged Wilderness. Guthix sent some of his dwarven forces to drive the terrible monster from the land. The mission was a success, as Flametongue was defeated and withdrew, but he evidently survived and is imprisoned in the Dragonkin Laboratory to the present day.