From the RuneScape Wiki, the wiki for all things RuneScape
Jump to navigation Jump to search
The Old School RuneScape Wiki also has an article on: osrsw:Glarial

Queen Glarial was a legendary elven Queen during the Fourth Age who was noted for her beauty. She was married to the powerful king Baxtorian until her death. She has a daughter named Eirlys and a grandson named Islwyn.

Although most of her early life is unknown, Glarial eventually met Baxtorian and married him, the couple being a powerful family and had many influence in elven matters.

After the cataclysmic God Wars, Guthix intended to create a decree to prevent the Gods from physically intervening in Gielinor. Although Seren did not participate in the war (although she did let any elves who intended to participate go), Guthix stated that Seren would not be exempt from his edicts. Seren, who had brought the elves to Gielinor during the First Age, knew that the elves would be unable to leave Gielinor, as the World Gate had been lost at the time. The "curse" she had unintentionally bound them to would also cause the elves to die in the process. As a result, Seren opted to shatter herself, as it was the only way she could satisfy Guthix's demands and protect her followers.

As a result of Seren's shattering, the elves of Prifddinas were in a panic, as they did not know what to do without their beloved god. Glarial and her husband Baxtorian quickly set to work to restore order, taking the throne as they were the most experienced and influential. Glarial reassured the elven masses, while Baxtorian quickly set up government positions to rebuild elven society.

Move to the east[edit | edit source]

As elven society flourished under Glarial and Baxtorian's rule, they decided to head east, past the Galarpos Mountains, to expand their influence. Glarial and Baxtorian left Prifddinas at the hands of their capable elven officials, before creating a majestic city. They were able to make alliances with the gnomes and humans, but were unable to do so with the ogres and goblins.

Little is known about the disappearance of Glarial. In the Fourth Age, Glarial was married to King Baxtorian of Clan Cadarn, becoming acting regent of the Cadarn holdings east of Tirannwn (which covered part of the human kingdom of Kandarin) after Clan Iorwerth seized control of the city of Prifddinas. Baxtorian and his allies were forced to respond by bringing the bulk of their armies into Tirannwn. In his absence, the human population of the east (who were treated as serfs under elven rule) rebelled against Clan Cadarn. Simultaneously, Glarial was captured by the enemy, causing Baxtorian to fall into a deep depression. Upon his return, Baxtorian constructed a memorial to Glarial and sealed himself beneath a waterfall, believing her to be dead.

Although the Cadarn elves searched for Glarial for some time, such attempts were unsuccessful and she was presumed dead.

In Roving Elves, the spirit of Glarial is called upon to change the nature of the consecration seed. 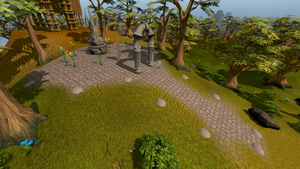 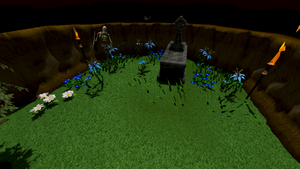 Queen Glarial's tomb is located near Baxtorian Falls. It plays a significant part during Waterfall Quest. The inscription (after translation) reads: Here lies Glarial, wife of Baxtorian, true friend of nature in life and death. May she now rest knowing only visitors with peaceful intent can enter..

To enter, the player must obtain a small pebble from the Tree Gnome Village. Located inside of this tomb is Glarial's coffin and a chest, from which Glarial's urn and Glarial's amulet may be obtained, respectively. The amulet is required to enter the Waterfall Dungeon under the Baxtorian Falls.

In place of Seren, a god statue of Glarial can be built on the western edge of Prifddinas.