From the RuneScape Wiki, the wiki for all things RuneScape
Jump to navigation Jump to search
For the achievement, see Kalphite King (achievement). 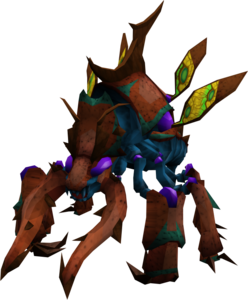 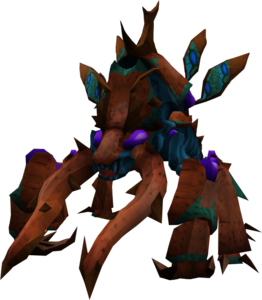 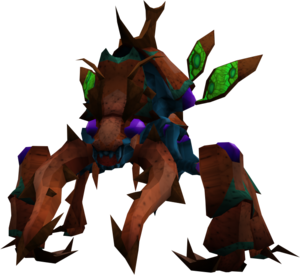 14 January 2013 (Update)? (edit)? (edit)YesThis mighty kalphite is even more powerful than the queen.

The Kalphite King, formerly dubbed the "Toughest Boss in RuneScape history", is a boss monster who can be found in the Exiled Kalphite Hive.

The Kalphite King was first mentioned at RuneFest 2011 in Mod Mark's RuneScape 2012 speech. The Kalphite King is the only monster in the game that can drop the Drygore longsword, mace and rapier, along with their off-hand versions, which are powerful tier 90 melee weapons. It also drops the perfect chitin, which can be combined with an off-hand drygore weapon, off-hand ascension crossbow or seismic singularity to create the tier 90 set of defenders.

On release, the fight with the Kalphite King and his summoned marauders was a challenge that required players to be adept with the action bar system and changes with the introduction of the Evolution of Combat.

The Kalphite King will not allow dwarf multicannons to be set up. Dreadnips and dominion mines can be used, although the latter does not have any effect on him.

Obtaining all unique drops will unlock the [Name] the Kingslayer title.

The Exiled Kalphite Hive is located south of the Jaldraocht Pyramid in the Kharidian Desert. The easiest way of getting there is running north from Menaphos or using Portmaster Kags (Jaldraocht option) by Menaphos tablet who will deliver the player via boat directly behind the Jaldraocht Pyramid at the Exiled Kalphite Hive. Players can also use the Desert Bandit Camp lodestone and simply run south from there. A third option is to use a pharaoh's sceptre to teleport to the pyramid and run a short distance south. A fourth way is for players who have access to the max guild to retune a portal directly to the Kalphite Kings' entrance. 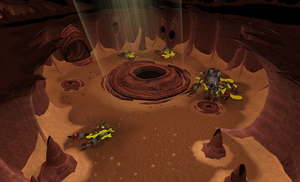 The entrance to the Kalphite King's Chamber.

Upon first entering the hive, there will be a blocked tunnel that can be cleared to create a shortcut (requiring level 23 Agility). This tunnel only needs to be cleared once. Click on the entrance near the tunnel, after which you can make or join a player's instance.

After a player enters the lair, the King will spawn and the fight will begin.

A player fighting against the Kalphite King.

The Kalphite King's drops are fairly unique compared to other monsters - rather than dropping one large amount, it drops smaller quantities which are then multiplied accordingly upon being rolled. In free-for-all groups, the whole drop goes to the player who dealt the most damage. In LootShare and CoinShare, the drops are split accordingly based on LootShare potential. For clarity, the whole drop (multipliers included) are listed on the table below rather than individual groups.

The average value of a drygore weapon is 23,380,238 coins. With the drop rate of drygore weaponry being ~1/43, each kill is worth 547,974 coins excluding normal and rare drop table drops.