From the RuneScape Wiki, the wiki for all things RuneScape
Jump to navigation Jump to search
The Old School RuneScape Wiki also has an article on: osrsw:Dagannoth Kings
"Dks" redirects here. For the barrelchest monster encountered during Pieces of Hate, see DKS.
For the achievement, see Dagannoth Kings (achievement).

The three Dagannoth Kings. Purple = Use Mage. Green = Use Melee. Blue = Use Range.

The Dagannoth Kings are a group of three dagannoths living deep in the cave on Waterbirth Island. They are each level 303 with 35,000 lifepoints, and represent the combat triangle. Each of them uses a different combat style and has a weakness in line with the combat triangle (while immune to all other styles). Each King possesses a unique ring drop, except for Rex who has two. The rings give some of the best damage bonuses for their respective styles. All three kings have the ability to drop the dragon hatchet.

Three of the strongest Dagannoths ever to exist, numerous Fremennik warriors have fought them for honour and glory, but all have fallen to them. It is not known if the Kings are blessed with long lifespans or are generally replaced as they die off. During the Second Age, at the height of the Empire, the Zarosian Church desired the Dagannoth and captured several for breeding without the proper facilities, releasing them into the wild. A Dagannoth Rex was present in the Second Age when it was killed by Vendi, tasked by the Church to deal with the growing problem. This corpse was later moved to the Senntisten graveyard.

In year 169 of the Fifth Age, the previous Dagannoth mother, who had been slain by an adventurer, was succeeded by her daughter, who attempted to breed a stronger group of Dagannoth just like her. Intending to conquer the surface world, she sent a massive group of Dagannoth to invade all Fremennik known islands, but the attack on Rellekka was repulsed by the Fremennik there, along with the adventurer that had slain her mother.

The people of Rellekka then began a counterattack, with a small strike force led by the adventurer, consisting of Baba Yaga, Koschei the Deathless, Princess Astrid and Prince Brand. As the strike force arrived at the hatchery, the Dagannoth Kings roared in the distance, realizing that their leader was in danger. The three Kings were intercepted by the rest of the group; despite their powers, they were forced to retreat, but killed Princess Astrid and Prince Brand in the ensuing battle. 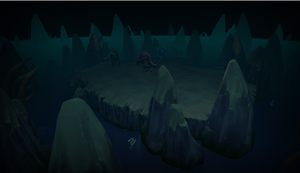 The arena the fight against the Kings takes place in.

A map of the dungeon

The Kings reside in the sixth level of the Waterbirth Island Dungeon.

The simplest way to reach them is by using a Dagannoth Kings teleport. Players with access to the Max Guild can retune the boss portal. Alternatively one of the War's retreats portals (PvM Hub) can be used if the player has killed at least one of the Kings. Both boss portals will teleport the player directly in front of the entrance, making them the closest teleport option.

Once inside the dungeon, go through the doors at the far end and follow the path marked on the map.