From the RuneScape Wiki, the wiki for all things RuneScape
Jump to: navigation, search
For the standard variant, see Nechryael. 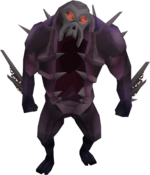 Nechryaels are demons encountered while Dungeoneering that require level 80 Slayer to kill. They are the only creatures to drop the unique Doomcore staff.

As of 19 April, 2012, Slayer monster frequency in Dungeons has been increased by nearly double, making an encounter with Nechryaels a far more common occurrence on attempted floors than they previously were.

The update history project is a work-in-progress – not all updates to this topic may be covered below. See here for how to help out!
Retrieved from ‘https://runescape.wiki/w/Nechryael_(Dungeoneering)?oldid=33602024’
Categories:
Hidden categories: