From the RuneScape Wiki, the wiki for all things RuneScape
Jump to navigation Jump to search
The Old School RuneScape Wiki also has an article on: osrsw:Lumbridge Sage
"Sage" redirects here. For the Dungeoneering herb, see Sagewort.

The Lumbridge Sage (real name Phileas, previous title Lumbridge Guide) is a non-player character who tells players about the history and politics of Lumbridge. He can be found just east of Lumbridge Castle, in front of the church.

Phileas features in Recipe for Disaster as one of the members of the Secret Council of Gielinor. He is rescued in a subquest of his own, after being attacked by the Culinaromancer and frozen in time for his own protection by Aris, by the player making him a Cake of guidance with the help of Wizard Traiborn.

He also had a small role in the Death to the Dorgeshuun, where he is one of the many people the player can introduce Zanik to. He acts very friendly towards her.

He used to be more of a general advice giver for new players, telling players not to tell anyone their password, what to kill, how to make money, and more. He did not specialise in tutoring any specific skill. However, the introduction of the Task System means that his role is now confined to provide information on Lumbridge itself. 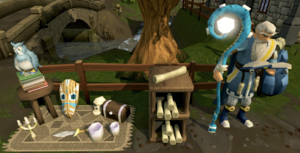 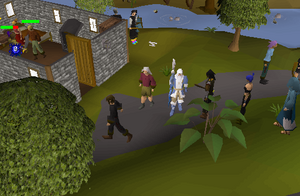 Lumbridge Guide before the graphical update.

Terrova, the Magic Instructor on the old Tutorial Island, also mentioned that the Lumbridge Sage is a friend of his, indicating the two have known each other well at some point in their lives. Terrova also advised new players to go to him for advice and guidance.

According to Postbag from the Hedge 39, he had several professions before becoming the Lumbridge Sage. One of them involved keeping owls but most of them were scholarly in nature. He has been a history teacher, a travelling dictionary salesman and an encyclopaedist (he wrote the 'G' section of Encyclopaedia Giganticus). His most recent job was at the Varrock Library but he left after a disagreement with Reldo, they didn't always "see eye to eye" and when Phileas suggested that they introduce a magic-indexing system, Reldo got rather cross. That's when Phileas decided to move to Lumbridge, to establish himself as a source of information for travellers. He says it is considerably less stressful than being a librarian.