From the RuneScape Wiki, the wiki for all things RuneScape
Jump to: navigation, search
This article is about the location. For the music track, see The Elder Halls. 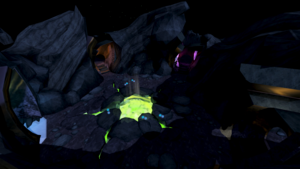 The Elder Halls of Freneskae.

The Elder Halls are a central location deep underground within Perfect Worlds such as Freneskae and Gielinor. They contain the sleeping Elder Gods in egg form as seen in Fate of the Gods and an Anima Mundi rift. It can be accessed from the World Gate after the quest Fate of the Gods.

During the The Great Revision, the Elder Gods 'hatch,' crawl to the rift, and then proceed to suck the anima of the world dry to revive themselves and destroy every planet except the one containing the current Elder Hall.

It can be deduced that the Elder Gods spend their time and energy creating worlds that can produce the maximum amount of Anima so that they can be nourished. However it is believed from Zaros' account that this is not always accomplished and that many Elder Gods die or are born stillborn from a lack of sufficient Anima, thus putting the Elder Gods and the multiverse in danger of extinction.

At any point in time there are no more than two Elder Halls in existence, the one in the perfect world of the previous cycle (and as such the lowest plane of existence), and the current one in which the Elder Gods sleep (the highest plane). Freneskae being the lowest plane and Gielinor the highest exemplifies this relationship. Freneskae had its anima sucked dry by the Elder Gods, and is a wretched and desolate place. A single Elder God remains in the volcano that leads to the halls - Mah. Thought stillborn, she was abandoned by her siblings, though she survived and managed to create life on Freneskae.

During The Light Within the player brings Seren here to restore her soul with the help of Zaros. Afterwards Seren and the adventurer return to the Tower of Voices in Prifddinas.

At the end of Fate of the Gods, the god Zaros tasks his general and champion, the Mahjarrat Azzanadra, to find the Elder Halls of the Elder Gods on Gielinor, as he hopes to rouse them in a bid to save Gielinor from the same fate as Freneskae. Though the Elder Halls of Gielinor have not been discovered yet, Jas and the others are roused due to Xenia's actions, but she bargains with the World Guardian - if they prove life deserves to exist, they would spare Gielinor from the Great Revision.

The update history project is a work-in-progress – not all updates to this topic may be covered below. See here for how to help out!
Retrieved from ‘https://runescape.wiki/w/Elder_Halls?oldid=33416351’
Categories:
Hidden categories: