What Lies Below is a standalone intermediate quest that takes place within Varrock and partially in the Wilderness. It features a large degree of movement and some combat situations.

A travelling trader has been stranded south of Varrock after his cart was attacked by local outlaws. He needs the help of a hero to recover his lost documents, but that's not all...

The Varrock Palace Secret Guard (VPSG) are on the trail of treacherous dealings with the Monks of Zamorak. Will you be able to help the VPSG and uncover what lies below? 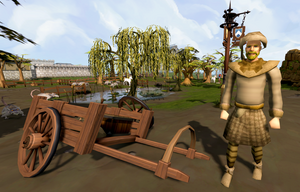 Rat Burgiss, by his broken cart.

Make your way to Rat Burgiss, who is on the road between Varrock and Lumbridge and to the west of the Exam Centre. He says that a bunch of outlaws ransacked his trading cart and stole some important papers. Offer to help him. He says the outlaws headed north-west, taking five pages with them. He tells you to kill the outlaws and get the papers back. He gives you an empty folder to keep the papers in. 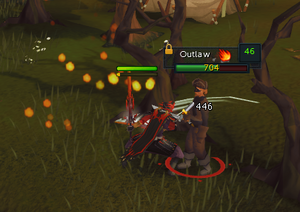 Murdering some outlawed ones.

Kill five outlaws to retrieve Rat's five papers, and then use the papers one by one on the folder to get a full folder.

Return to Rat with the full folder. He takes the folder and asks you to deliver a letter to Surok Magis in the library of Varrock Palace. Though written in a hard to read font, the message is in English.

Head to the library in the northern part of the palace and speak to Surok Magis. You give him the letter, which he quickly destroys with a spell. He tells you that he has learned how to transform simple clay into gold bars, and will share the gold with you but first needs a few more items: an ordinary bowl and an infused wand. He gives you a wand to be infused with chaos and Sin'keth's diary. Finally, he tells you to search the library to find an old tome; he forgot where he left it but says it is easy enough to find.

In this conversation, Surok states that you will need either a Chaos talisman or Chaos tiara in your inventory to infuse the wand. This is not the case, however if reaching the chaos altar either through the Wilderness or the Tunnel of Chaos, either a talisman or tiara (or Wicked hood) will still be needed in order to access the altar.

Go to the north-east corner of the library, and search the bookcases opposite the table and two chairs to find a musty old tome called Dagon'hai history. It is possible to have taken this book previously, and if it is in your bank you will receive a game message saying as much but without referring to the book by name.

Go to the Chaos altar with 15 chaos runes or pure essence for crafting the runes.

The fastest way to get to the chaos altar is by using the wicked hood's teleport directly to altar. The hood must have previously been fed a chaos talisman or tiara for this option to appear.

Option 2: Through the Abyss[edit | edit source]

If you have gained access to the Abyss by completing the short Enter the Abyss miniquest, then you can use it to reach the altar without needing a talisman.

Option 3: Through the Wilderness[edit | edit source]

Head to the Chaos Altar entrance, located in level 9 Wilderness north-west of Edgeville, or just south-west of the Wilderness Crater Lodestone.

Once inside, make your way through the maze to the Chaos Altar. The journey to the altar can take some time, as the maze can be confusing and the walk through the Wilderness can be dangerous.

Option 4: Through the Tunnel of Chaos[edit | edit source]

A player infusing the wand.

Read Sin'keth's diary, and then head east of Varrock and just south of the Jolly Boar Inn to a statue of Saradomin. It is not necessary, but you can talk to Anna Jones, who will give you a bronze pickaxe.

Choose the Dig option on the statue to reveal the Tunnel of Chaos entrance. Enter the hole in the statue. You find that Dagon'hai organisation lives in the tunnel.

Head north until you reach a portal. The portal leads to the third level of the Chaos Maze. Navigate the rest of the maze to reach the altar.

Use your wand on the altar. It absorbs the 15 chaos runes and turns to an infused wand.

Now return to the library of Varrock and talk with Surok Magis, with the infused wand and a bowl in your inventory. He gives you Surok's letter to deliver to Rat.

Head back down to Rat, and deliver the letter. Rat explains that he is actually the commander of the Varrock Palace Secret Guard and that Surok Magis is planning to take over the kingdom of Misthalin by using a powerful mind control spell on King Roald. Rat directs you to Zaff, owner of the staff shop in Varrock, to help with a spell to counteract the effects of Surok's spell.

Return to Varrock, and talk to Zaff. He explains his plan to you, gives you a Beacon ring, and hands you Zaff's instructions on how to arrest Surok Magis.

Return to Surok Magis, who is now wearing Dagon'hai robes, and talk to him. You see a short cutscene where Surok casts his spell on King Roald, who just came in.

Fight King Roald until a message pops up in your chat box saying "Now would be a good time to summon Zaff!" If you summon Zaff too early, he will teleport you and him back to his shop.

King Roald is located in a single-way combat area, and is immune to the effects of poison and rings of recoil. Overall, the fight shouldn't be too hard, as King Roald hits rather low for his level and only has 1400 life points. He is weak to fire spells; however any kind of weapon or spell will do the job.

Choose the Summon option. Zaff arrives in a cutscene, saves King Roald, teleports him away and blocks Surok from teleporting away.

If you try to leave the room during the fight, you will be teleported south of Varrock, near the dark wizards. Also, if you are ranging, you will not be able to retrieve your arrows after the fight.

Return to Rat Burgiss, and speak with him. 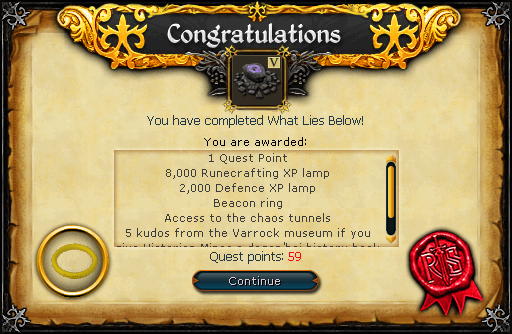 What Lies Below is directly required for the following quests/miniquests: 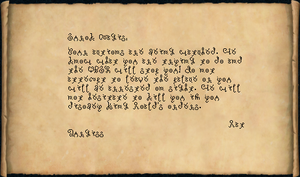