From the RuneScape Wiki, the wiki for all things RuneScape
Jump to navigation Jump to search
The Old School RuneScape Wiki also has an article on: osrsw:Lady Ithell (Fourth Age) 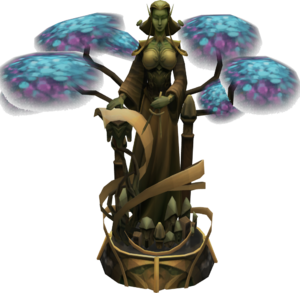 The statue that Lady Ithell infused a part of herself into

Lady Ithell was the previous leader of the Ithell Clan. Like most of the other elders, she was captured by Lord Iorwerth but liberated by King Baxtorian's army during the Siege of Prifddinas, after which she helped revert the city to its seed form. She then designed and founded Lletya with Lord Cadarn, calling it her greatest work. She left parts of her soul in the designs so that her eventual successor could inherit her memories to end the civil war, after which she died of old age. Indeed, she was succeeded by Kelyn Ithell.