From the RuneScape Wiki, the wiki for all things RuneScape
Jump to: navigation, search
The Old School RuneScape Wiki also has an article on: osrsw:Port Tyras 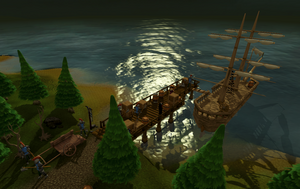 Port Tyras, as seen from above.
Port Tyras map

Port Tyras is a port west of the Tyras Camp. Players can't use the charter ships away before completing Regicide, but to arrive there by ship requires that you have chartered a ship coming from Port Tyras already OR if you have killed the Tyras Guard as part of the Regicide quest already. This is one of fastest ways to get to Tyras Camp besides using the Tirannwn quiver 2 after completing the medium Tirannwn achievements and it's greater variants which grant five daily teleports direct to Tyras Camp.

Some players may also find the charter ship helpful in getting to Lletya if they have lost their crystal teleport seed and do not want to go through the Underground pass or Arandar gate or have not yet completed the Tirannwn achievements.

Port Tyras was likely erected as part of King Tyras' invasion of the forest of Isafdar, though it has no buildings and the only notable feature is a pier with a charter ship docked at it, and several Tyras Guard positioned there. Although the port makes it easier for players to access Tirannwn, King Tyras's men cannot use it to escape the Iorwerth Clan as they must remain to fight against their Dark Lord.

Partial completion of Regicide is required in order to access Port Tyras and the Tyras Camp.