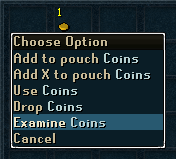 Examine is a feature that allows players to inspect objects. Almost anything in RuneScape can be examined, whether it is an item, NPC, interactive scenery, non-interactive scenery, or another player. To examine an object, right-click it and click on "Examine". The examine option is usually the last option when right-clicking an object. If a monster's combat level is higher than the player, then the examine option is second to last, unless targeting options have been changed in Settings. A short description of the object will appear on the chatbox.

Examining items is often not very useful for anything other than interest. One particularly unhelpful example can be seen when examining opal bolt tips, which yields the message: "Opal bolt tips." If an item is tradeable on the Grand Exchange, its Grand Exchange price will be displayed in its examine. If it is used in any skills, the examine will also state the skill(s) and level(s) needed to be used in parentheses.

Examining some items or scenery during quests can be valuable or even necessary. For example, examining the levers on the bottom level of the Abandoned Mine during Haunted Mine helps the player differentiate the levers.

When examining stacks of untradeable items (or coins) bigger than 100,000, the usual examine text is replaced by "[exact number of items] x [item name]" when examined in the bank or inventory. If it was dropped, the usual examine would appear below the amount. However, when examining stacks of tradeable items in the bank, it will only show the regular examine text.

Upon examining a members object on a free-to-play world, the player will receive the message Login to a members server to use this object.

The examine text is initially decided upon by the developer who makes the object, though it is occasionally adjusted by editors.[1] 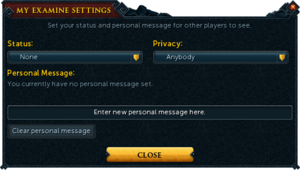 Setting up a player-made examine interface. 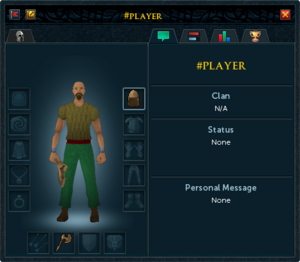 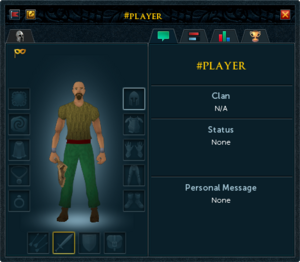 The player made examine was a feature added on 17 November 2014. The player can create or modify their personal examine feature by clicking on View More Actions

in the chatbox, followed by My Examine Settings

. Or if using Legacy, right click the bottom-right corner of the "Report" button. Players can use a list of 23 statuses and can type up to 80 characters into a personal message for other players to read. The player examine can show any worn items, overrides, levels, combat stats, and the clan that player is in. Regardless of the profanity filter setting, text that would not be filtered with the setting off will still be censored for saved text. This text can be reported just like normal text.

Players can set a privacy flag to control information shown to others about worn equipment, the clan the player is in, skills, and achievements. If the privacy mode is on, all visible equipment will be treated as cosmetic items. Access to the player's examine can be set to anybody, friends only, or nobody.

A hidden update was added into the game enabling right-click compare a player on the Friends List who is online and on the same world. This eliminates the need to be near the player to examine them and can be done anywhere so long as they are on the same world.

Player spoofs, such as the ones seen while riding Gnomecopters, have the 'examine' option. Their examine text usually contains a joke or reference of some kind. However, they are just non-interactive NPCs and are not players. It is possible for a player to examine themselves in a certain part of the quest The Branches of Darkmeyer through the eyes of vampyres but with players' own consciousness, stating that this feels like "an out-of-body experience".

In the very early days, before the pop-up right-click menu, non-PK players did have an "examine" option that would say, "it's (player's name)".

Many players would like to be able to define their own examine text that others can read, and have posted this opinion on the RuneScape Forums. The idea was confirmed as being in development by Mod Jack in late 2014, and a forum post was created to let players suggest ideas on how to implement the system.

Mod Craddock said of the proposal: "It's quite a nice idea but it could be quite difficult for us to stop players from writing horribly insulting examines. Can you think of any solution to this?" Players responded by saying that examine text should be subject to the chat filter, and inappropriate text should be reportable under the Rule 1 - Offensive Language. They have even suggested that all player-made examine text should be checked manually by Jagex before "going live", and offenders should have their right to provide their examine text revoked.