From the RuneScape Wiki, the wiki for all things RuneScape
Jump to: navigation, search
The Old School RuneScape Wiki also has an article on: osrsw:Nechryael
For other uses, see Nechryael (disambiguation). 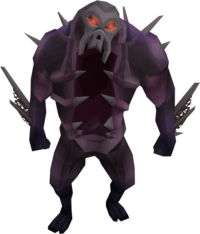 Nechryael are Chthonian demons that require level 80 Slayer to kill. They are found on the top floor, northwest corner of the Slayer Tower in Morytania and in the Chaos Tunnels.

Cannons cannot be used as a means to kill them as cannons are not permitted in either of the places nechryaels can be found, but these demons are considered weak for their level. With low life points, low damage and mediocre defence, they can be easily defeated using a powerful crush weapon (their weakness), such as a chaotic maul, dual wielded drygore maces, or the Superior kyzaj. They can also be killed fairly effectively with slashing or stabbing weapons.

A nechryael's main attack is a two handed clawing move that hits up to 276 life points. When engaged in melee combat, a nechryael may randomly summon up to two level 95 death spawns to assist it. These death spawns have a meagre 500 life points and a low max hit of 10 life points, but are very accurate. They can be ignored by high level players, however they can be a nuisance for lower level players.

Most players with a high defence choose to ignore the Death spawn completely because they inflict so little damage that they are not worth the time to defeat. With a two-handed weapon, abilities such as Quake and Hurricane can quickly kill the death spawn without diverting attention away from the nechryael.

Using a Guthan's set against a nechryael is extremely effective if the player has high combat stats.

For those who wish to mage or range nechryael in the Slayer Tower, there is a hole in the floor in the southern part of the room that can be effectively used as a safespot. Another good strategy is to stand behind a death spawn so the nechryael will get trapped behind it. The roof area contains several objects that can be used for safespots, such as a skeleton lying on the floor.

Also a good tip is to use the ability Sacrifice on the death spawns - the ability will usually kill them immediately due to their low constitution, healing the player for 500 life points.