From the RuneScape Wiki, the wiki for all things RuneScape
Jump to: navigation, search
This article is about the monster. For the summoning familiar, see Blood nihil (familiar). 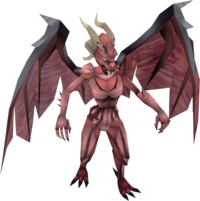 The blood nihil is fought in the Pit of Freneskae during the Fate of the Gods quest alongside the smoke nihil, the shadow nihil and the ice nihil.

The blood nihil is a member of the nihil race, created by Zaros during his testing of genetic manipulation. By its examine, the blood nihil was likely created by weaving the essence of a vampyre.

The blood nihil, like the other nihils in the arena, runs across the halls and into holes in the wall, inflicting damage and a 100 damage Slaughter to any players that stand in its way. It always runs east, appearing from a different hole each time, until the player attacks it and draws its attention, at which point it solely focuses on using melee. The blood nihil has more health than its other counterparts.

This nihil has a special ability which it uses every 8 auto attacks where it summons siphon shield that heals it when attacked, similarly to Nex during her blood phase. After it finishes the siphon, it will immediately attack the player if he/she is within range, regardless of where he/she is standing. If the player is far from the blood nihil after the siphon, it will stay still but will immediately head for the player once he/she is within range.

After the quest, the nihils may be fought for their drops. The Pit is empty when entered, but nihils can be summoned at the centre of the Pit through a dialogue box. They are aggressive unless the Shard of Zaros is equipped. Their special ability does not heal other nihils. Players with level 76 Slayer or higher will also be able to request nihils from a slayer master (Kuradal, Morvran, or Laniakea) at the cost of 50 slayer reward points.