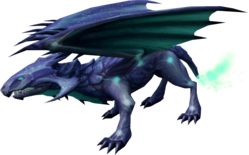 Celestial dragons are modified white dragons that use temporal abilities to stun their opponents. They can be found in the Dragontooth Island resource dungeon after the One of a Kind quest is complete or within the Dragonkin Laboratory.

During the quest, an instanced version of the resource dungeon is visited with around six attackable celestial dragons which drop only dragon bones - they do not appear to respawn. After that stage is complete, the full version of the dungeon is available.

The celestial dragon was the winner of one of the January 2014 Power to the Players ruby-tier polls, beating the alchemical, gemstone, and gold dragons, which were the other options.

The two quickest ways to get to them is by either using the Dungeoneering cape perk, or by teleporting to the Dragontooth Island resource dungeon with a Hoardstalker ring, Big Book o' Piracy, or the skill portal in the Max Guild. An alternative method would be to teleport to Port Phasmatys with an Ectophial and then running south-east to the boat that travels to Dragontooth Island. A ghostspeak amulet, or completion of the Hard Morytania achievements, is required to talk to the ghost captain.

The celestial dragons' special ability is to freeze the player in time for a short duration. The time freeze effect lasts for approximately three seconds and stops any channeled abilities the player is performing, such as rapid fire. It also traps familiars and followers in space and time, making it disappear from the current realm for the duration of the freeze, at the end of which it returns. The animation for this ability shows the dragon raising its wings as it casts a spell, followed by a green orb expanding around you. The player will also receive a message in the chat box saying, "The celestial dragon traps you in time." Anticipation will not stop the stun from occurring, but Freedom can be used to break free from the stun.

Celestial dragons seem to use their time trapping ability after every 5 auto attacks and always attack with dragonfire or melee (depending on the player's distance away). As such, if the player can deal enough damage to kill the dragon in a short period of time, this attack can be avoided altogether. One may stun a dragon with Binding Shot to delay its next attack, effectively delaying the time trap.

The time trap ability does not reset if the dragon has been left alone. Therefore, if a dragon attacks four times and is left alone (full life point restoration), the next attack or second attack from the dragon when attacked results in a time trap.

Because players take no damage from celestial dragons other than dragonfire when outside melee distance, it is recommended to use the gear with the best damage bonuses specific to the style used.

These dragons can be killed very quickly when using ranged power armour, super antifire potions or wyrmfire potions, a crystal or higher bow, and super or higher ranging potions. Standing at least a few spaces away from the dragon and drinking a dose of super antifire/wyrmfire, will remove all risk of damage. A healing familiar will not be needed, so a combat familiar such as a shadow nihil can be used for faster kills.

As these dragons are weak to arrows and have very high defence, it is important to note that magic and bolt-firing weapons (unless used with dragonbane bolts) are not as effective as arrow-firing weapons. A player who does not have the required level to make super antifires will find it very long and time consuming to kill those dragons. A good strategy for players who do not have access to these potions is to fight the dragons in melee range with a bow and regular antifires, while having a melee protection prayer on. When combined with a healing familiar, this strategy will be almost as effective as super antifires, the only downside being the damage taken.