From the RuneScape Wiki, the wiki for all things RuneScape
Jump to: navigation, search
For the achievement, see Astellarn (achievement). 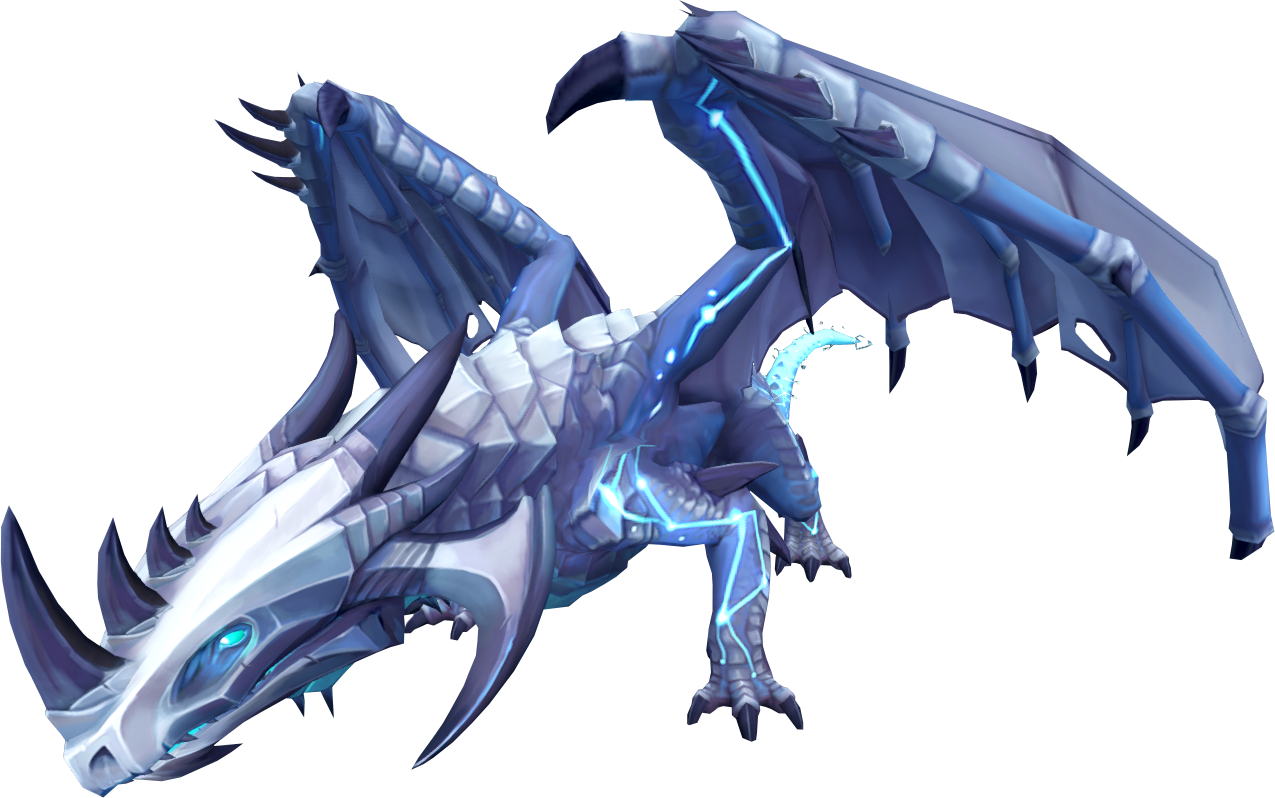 Astellarn is the first celestial dragon ever created and is the first boss in the second elite dungeon, the Dragonkin Laboratory.

According to dragonkin research, Astellarn was a white dragon who was the prototype for the Dactyl Dragonkin Phalaks' project. Her name was given to her by Kerapac's son, Vicendithas. She was subjected to abyssal magicks that resulted in her mind being warped, and she became so uncontrollable and aggressive that she would attack anyone on sight. One day, she teleported into another dimension and was deemed missing; Vicendithas planned to euthanise her when she returned, but that never happened as the lab was sealed when another creation went terribly wrong, at which point Astellarn returned to the laboratory.

Astellarn is the first of the three major bosses of the dungeon. She has 250,000 health.

She uses all three styles of combat. Against players in close range, she can use either melee (lunging at the player) or ranged (launching celestial arrows across the arena). Distant players will instead be attacked with magic. Unlike the other two attacks, the magic attack has a large cone AoE and has 100% hit chance. It is also possible to avoid the magic attack, though this occurs rarely and Astellarn will quickly adjust herself to the proper position if she finds that her attack cannot damage the player. It is recommended to stand north of Astellarn throughout the whole fight as she will only use magic attacks. Standing elsewhere runs the risk of potential ranged and melee attacks, both of which hit harder and faster.

Unlike the other two bosses, Astellarn is static and will not move from her spot.

Occasionally, she may summon a pulsar, which has 20,000 health. They periodically explode and deal cannonball-type damage with 100% accuracy throughout the whole arena. The damage they deal is scaled with the number of people in the dungeon (including players outside of the fight). In solo encounters it will deal around 900 damage, while it can deal up to 2,200 in trios. Pulsars will despawn roughly sometime after the next one appears, but it is still recommended to destroy them as soon as they appear since they spawn at a very slow rate. In solo encounters, Debilitate should be used on Astellarn as she hits higher than the pulsar.

Occasionally, she will select a player as a wyrmhole anchor, with a small bar appearing; once it fills, a black wyrmhole appears under or around the player depending on their position. Though appearing as a 5x5 black hole, the wyrmhole actually has a 7x7 AoE and deals rapid damage of up to 500 on the rim and up to 2,500 in the direct centre per tick if players are near an unstable wyrmhole. The anchored player should be aligned in the middle of the northern quadrants so that the celestial rain (mechanic explained below) does not envelop the wyrmhole completely. Surge or run towards Astellarn as soon as the wyrmhole appears. This ensures it appears in the most optimal spot.

Astellarn will then summon a neutron star which follows a player in the arena. The star has 500,000 health, but it is meant to be lured into the black wyrmhole. Should the neutron star touch any player in the arena, then the game message A neutron star exploded! will appear and deal 5,000 damage to all players in the arena. Only one star spawns for every wyrmhole, so it is important to avoid touching the neutron star or kills will be delayed significantly. If the star explodes, it's generally recommended to restart the fight. For this reason, groups should stay next to each other and only move when the star has been spotted. This ensures it does not explode immediately while trying to follow a player.

When the star falls into the wyrmhole, it turns white and becomes stabilised. Standing inside the wyrmhole in this state allows players to deal increased damage against Astellarn, and allows players to be in phase with her (mechanic explained below) to avoid the damage reduction she gains.

Note: The wyrmhole and neutron stars are summoned on separate timers; one based on the start of the fight and the other based on entering the dungeon. It is possible for a wyrmhole to consume a neutron star that would have been meant for the upcoming wyrmhole, effectively wasting it and causing the fight to drag on further. For this reason, it is recommended to teleport out of the dungeon once Astellarn is reached and then return to the dungeon. This ensures the wyrmhole and neutron star spawns do not collide with each other.

Once she reaches 200,000 life points, she will state The cosmic pathways open to me., causing celestial rain to fall in one of the four quadrants in the arena. Astellarn will also start phase shifting and all damage dealt to her (excluding poison) outside a stabilised wyrmhole will be greatly reduced. The rain starts off at 50 damage per half-tick, which gradually increases to 550 if players stand in it too long. This is soft typeless damage, so it may be reduced with defensive abilities. Players should be wary if using Resonance to heal from Astellarn's attacks as the rain will use up the player's Resonance hit. If the rain covers the wyrmhole completely, it is recommended to restart the fight. The rain periodically changes its position, though it is possible for it to stay in the same spot again. Damage is reset to the lowest amount when this occurs.

If a wyrmhole is placed between two quadrants, with one of these being covered in rain and the neutron star spawns in the clear section, use Debilitate/Reflect while running into the rain to reduce damage taken. Move out when the star stabilises the wyrmhole.

Astellarn drops onyx dust, unless the codex or journal is dropped, which replaces the dust.